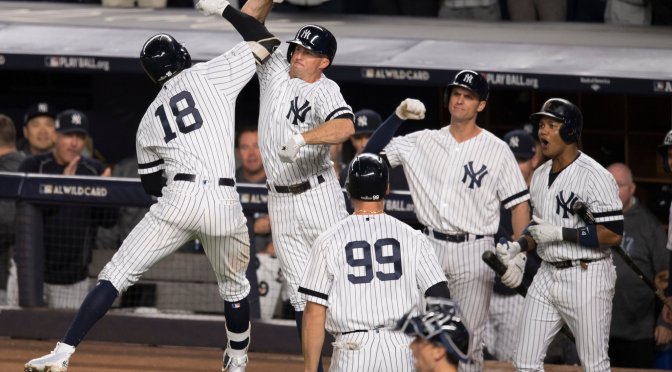 Alexa, play In My Feelings by Drake.

It’s 1 AM and I just turned 23 years old. So I did what anyone would naturally do and started watching 2017 Yankees playoff highlights. And it just hit me that I am going to miss Didi Gregorius an extraordinary amount this year.

There were a variety of reasons it took like six months for this to really hit me. The biggest was probably the fact that at the time of him signing with the Phillies, the Yankees were still locked in on Gerrit Cole. We haven’t had a true ace in years, and every Yankee fan saw first hand just how good Cole was. Any money they weren’t gonna give to Didi was just more they could throw at Cole, and that’s exactly what ended up happening.

Another reason is the fact that the Yanks’ middle infield was already crowded, as Gleyber Torres and DJ LeMahieu were both All-Stars last season. Tough to make the case that we NEEDED to bring Didi back when you’ve got those guys.

The last reason is probably a little bit of recency bias. I really do think Didi rushed back from his injury, as he just didn’t seem right all year in 2019. He showed flashes, but he just wasn’t the same guy who was a staple in the middle of the Yankee lineup in 2017 & 2018. Some of the analytics-heavy fans on Twitter might have gotten in my head a little bit too, because they were constantly ripping on Didi all last season. But the truth is I think he has a huge bounce back year in 2020, and I am gonna miss the absolute shit out of Didi.

After Derek Jeter retired, everyone wondered how anyone taking his place at shortstop could possibly follow in his footsteps. Not only did Didi succeed in New York, he became a fan favorite himself. He really was the perfect Yankee; he played hard, he was a great teammate, and he came through in the clutch (not letting you win that round analytics nerds, clutch IS a real thing).

It’s so painful that I haven’t seen the Yankees win a World Series since I was in seventh grade. Sure, plenty of fans haven’t even seen their team win one. But being a Yankee fan means every time they lose, you’re getting incessantly ripped on by any non-fan. And I understand; we’re the Duke/Patriots etc. of MLB, and I give those fan bases a ton of shit. It comes with the territory.

There was plenty of that shit talk going around in the 2017 Wild Card game when Luis Severino lasted only a third of an inning, leaving the Yanks with a 3-0 deficit. Every non-Yankee fan watching was ready to drink our tears, until Didi came through. That wild card home run had to be the quickest swing of emotion I’ve ever had in all my years of sports fandom. From “how did our ace only get one out against the 85-win Twins?” to “why did I ever have any doubt that we were gonna win this game?”, Didi saved the Yanks’ season with one swing.

He had a pretty quiet division series until he took the Cy Young Award winner deep in his first two at-bats in a decisive Game 5 on the road to once again propel the Yankees to the next round of the playoffs.

And even though he had a down year in 2019, getting soaked with beer in the bleachers after Didi’s grand slam sunk the Twins once again was the craziest moment I’ve ever had at the Stadium.

I guess what I’m trying to say is I feel a little guilty about how Didi’s Yankee career came to an end. I wanted so badly for him to be one of the guys to lead us to #28. And for a guy who effortlessly filled Jeter’s shoes and provided us with some of the best Yankee moments of the decade, it sucks that his departure was downplayed because of the pursuit of Gerrit Cole and the fact that we have Gleyber. But unfortunately, that’s baseball Suzyn. I think I speak for all Yankee fans when I say that Didi Gregorius will always have a special place in our hearts, and I wish him nothing but the best in Philly.