I said it in my blog the other day, but The Last Dance was awesome. As someone who didn’t grow up watching MJ play, it really gave me a sense of how unbelievably cool and talented he was.

However, I did grow up watching LeBron James play. I’m not going to argue who’s the “GOAT” on here because it’s the most tired argument in the history of sports. I’m sick of it. But you know what I’m not sick of, and likely never will be? Trashing ESPN! I mean what the absolute fuck is this?

Would LeBron have been a better running mate for MJ than Pippen?

Scottie Pippen was a great player. The dude played on the Dream Team. MJ even said himself, “you can’t talk Michael Jordan without Scottie Pippen.” But in what world are we going to act like LeBron couldn’t have done everything Pippen did and more? If Michael is the best player ever, LeBron is undoubtedly #2. I get that ESPN is usually clickbait-BS, but jeez, clean it up. And how about this poll? 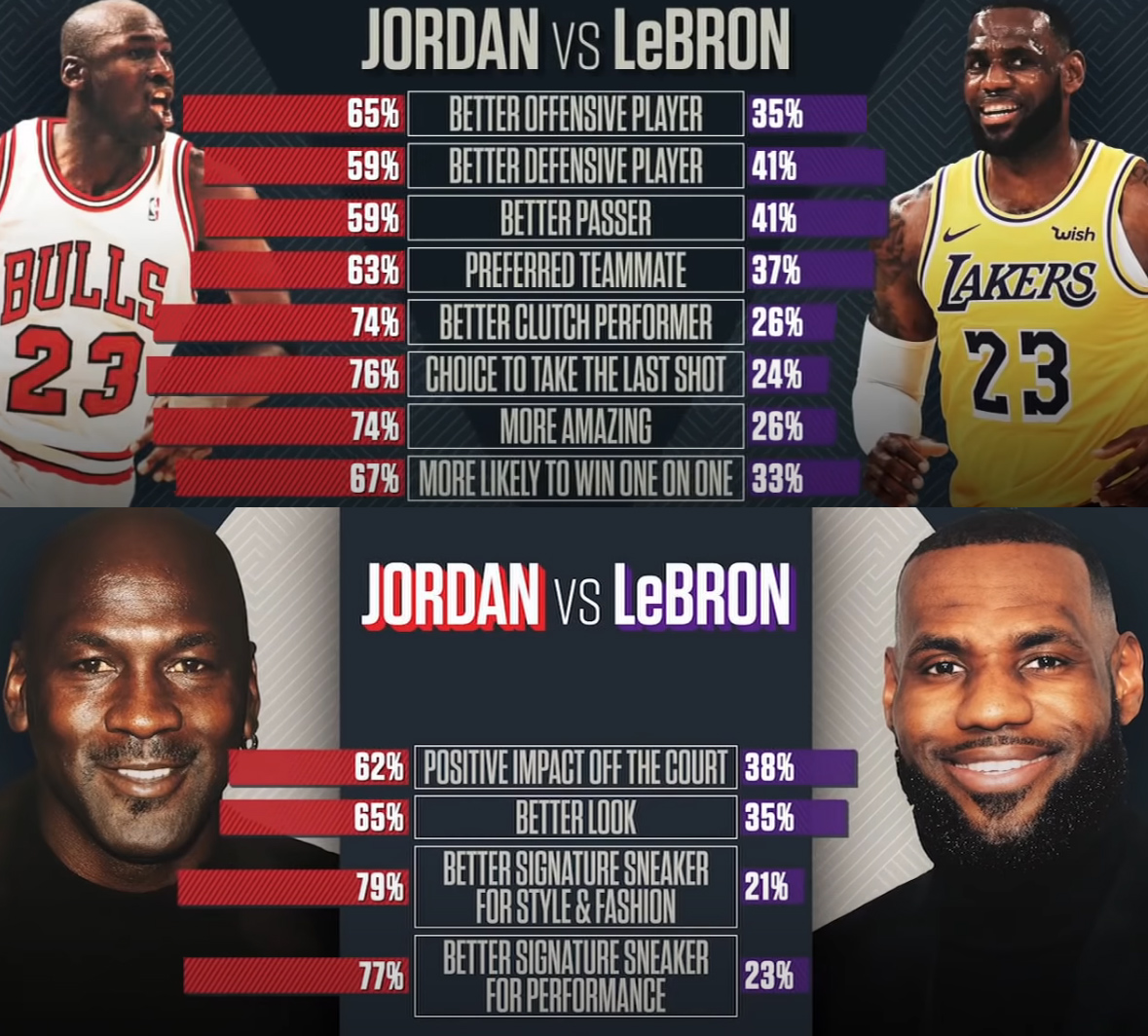 Like I said, I don’t wanna legitimately break down the “WHO’S THE GOAT??” I’m not trying to deny Jordan’s greatness. But some of these results are just insane. I’m fairly sure they only polled people who had a picture of LeBron as Mao Zedong as their profile picture.

59% of people picked Jordan as the better passer? LeBron has averaged 7.4 assists per game in his career compared to Jordan’s 5.3. LeBron’s entire game is based off of creating for others, whereas Jordan was more of a pure scorer. To call MJ the better passer is insane. Also, will somebody please tell me what the hell “More Amazing” is all about? We’re talking about the two best basketball players ever here, not superlatives in a high school yearbook. Might as well have had them vote on “best smile” and “most likely to succeed” while they were at it.

But I’m not mad at the people in the poll; people have every right to their anti-LeBron opinions. I’m mad at ESPN. They’ve literally been so far up LeBron’s ass for the past decade it’s insane. Get a load of this:

One year ago, @KingJames had some words of wisdom for his son, Bryce. pic.twitter.com/lrHsXuRDqV

“One year ago today, a dad talked to his son.” What? Like yeah, I would hope he talks to his sons every day. SportsCenter has basically been LeBronCenter since 2010, it’s exhausting even for fans of his. But they come out with a Jordan documentary and now their tune completely changes. If ESPN was gonna simp LeBron as hard as a 13-year old commenting on Addison Rae’s Tik Toks, at least be consistent with it. But, classic ESPN, just trying to fit in, acting as if they’ve been team MJ the entire time. Almost as pathetic as a dude bragging to his friends how he’s totally gonna get with a girl, but when she rejects him he says “she’s ugly anyways.”

Honestly, as I get to the end of this blog, I realize who my beef REALLY should be with: myself. I shouldn’t expect more from ESPN. They’re the worst, and I’ve known it for years. Shame on me and my dumb brain for expecting differently.