On Wednesday night, Jacob deGrom pitched seven dominant shutout innings, striking out 14 Marlins, en route to a Mets victory.  When it was time for Mets manager Mickey Callaway to reach into the bullpen in the Bottom of the 8th Inning, New York held a 6-0 lead.  The first reliever on whom Callaway called was journeyman southpaw Luis Avilan. 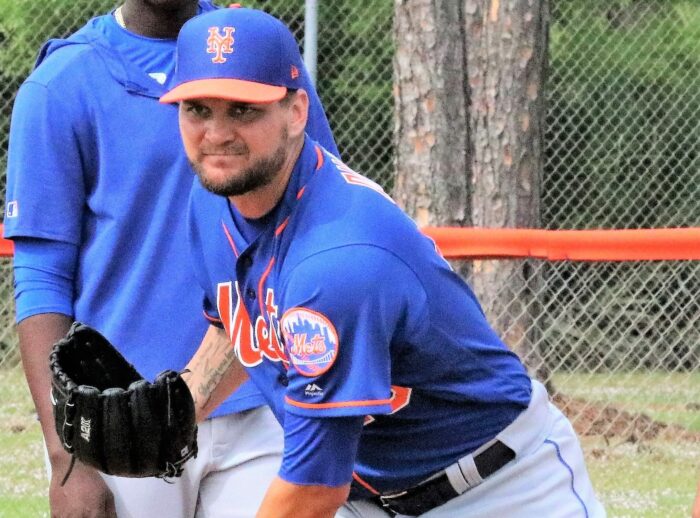 As soon as Avilan entered, I thought, “The Mets are winning 6-0, and their ace pitcher dominated tonight.  As usual, the Mets have used 3 or more relievers in all of their games so far, and Avilan is likely the Mets’ worst reliever.  It would be wonderful if Avilan could pitch two innings to rest the other guys in the pen.”  OK, I admit that I was not necessarily thinking in grammatically correct fashion, but you see my point.

It should not be a big task for a manager to ask any MLB pitcher to throw two innings and allow five or fewer runs.  At least that is what I hoped or thought.  As it turns out, Avilan pitched a shutout 8th Inning before getting into trouble in the 9th.  He ultimately allowed 3 earned runs in the 9th; Robert Gsellman allowed another; and closer Edwin Diaz had to finish out the game.  Yes, it felt good to get the win, but it is nevertheless demoralizing to know that, even with a dominant pitching performance (and a 6-run cushion), the Mets had to use three relievers – closer included.  If the Mets needed three relievers in THAT game, when the heck will they be able to get by with two or fewer?

As a result of that game, I figure this is the perfect time for me to bring up what I believe to be the next frontier in “Moneyball”.  (I would say that this comment alone makes it 75% likely that Brad Pitt now becomes a regular BTB reader.)  Well, Brad (aka “Billy”), here is the next frontier in “Moneyball”:  You need pitchers who can pitch several innings.  This might seem obvious, but, year after year, starting pitchers are pitching only 5-6 innings.  Year after year, we see few relievers who are comfortable pitching more than one inning.  Apparently, Luis Avilan has historically been a disaster when asked to pitch more than one inning.  Lesson learned.  As it turns out, my “pitchers should be able to pitch more innings” idea might not be as obvious as one might think.

Anyway, let us do some quick math.  If we assume that the average SP goes 6 innings in a start, that leaves 3 innings for the pen.  This means that, forgetting about extra innings and Bottoms of the 9th that do not happen, a team must find 486 innings of relief over the course of a season.  The typical National League bullpen has 7 arms.  Therefore, those 7 pitchers must each pitch roughly 70 innings in a season….but who am I kidding?  Injuries and September call-ups happen, so teams will use up some of those 486 innings with some truly awful pitchers, as opposed to the standard level of “awful” we usually see with the back end of an MLB bullpen.

Nevertheless, for argument’s sake, let us stick with the “70 innings” number.  Does the number “70” sound like a lot of innings?  It does not for a starting pitcher, but it does for a reliever.  This dichotomy occurs because a pitcher’s fatigue depends not only on innings pitched but also on games pitched.  Making 70 1-inning appearances with 70 times warming up in the bullpen (and likely another 15 times warming up and not getting into games) takes a much bigger toll on one’s arm than making 12 6-inning starts or 10 7-innings starts (with the same number of times warming up as pitching in games).  I should note that no coach has put me on the pitcher’s mound since tee-ball, so I invite our resident pitching expert Rob Sartori to correct anything I am misrepresenting here. 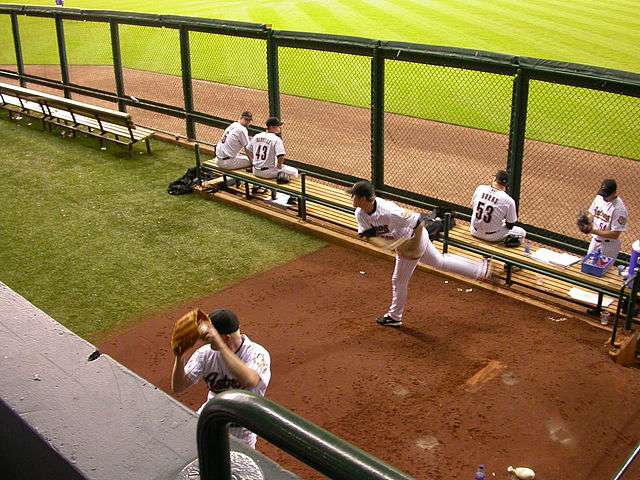 Assuming though that I do know what I am talking about, there is a lesson to be learned from these 1-inning pitchers and starting pitchers.  Would it not make more sense to have a bullpen full of guys who can throw 2 or 3 innings at a clip?  If so, a manager could manage the way in which my two high-school coaches did.  We would start every game knowing our starting pitcher and the two or three guys who would pitch in relief, if necessary.  Ideally, each reliever would throw two innings or maybe more.  Then, if a pitcher threw several pitches in a game, he would not be available during the next game.  Does this idea not make more sense than what we currently see in MLB?  Additionally, some days a pitcher “has it”, and some days he does not.  When a manager goes to 4, 5, or 6 relievers in a game; the probability that at least one reliever does not “have it” is great.  Also, if a pitcher clearly “has it” in a game, it would seem logical to have that guy throw several innings while he has his good stuff.

Yes, my idea does border on the “Moneyball” “closers are overrated” theory, in that I would not be a slave to bringing in my top reliever for any save situation.  I would be willing to make exceptions only for truly dominant closers, but “truly dominant closers” is close to an oxymoron.  I want to believe that Edwin Diaz falls in this category, but it is way too soon to say that.  In my mind, the only “truly dominant closers” in the modern-closer era have been Mariano, Dennis Eckersley, (at times) Trevor Hoffman, younger Craig Kimbrel, K-Rod in his Angels days, and that one year of Eric Gagne.  All other closers have been given the “You automatically get the 9th Inning in a save situation” honor simply because they were the best relievers on their teams; not because the so-called “closers” were actually dominant.  If a manager is going to take out a reliever who pitched well in the 8th inning, one of the guys listed earlier in this paragraph had better be warming up in the pen.

The key here is that I am sick of seeing relievers lose effectiveness late in the season because they have already made 70 to 80 appearances that year.  In fact, this breakdown can happen much earlier than that if a manager feels the need to go to guys night after night in April (as was the case last year with Seth Lugo and Robert Gsellman and the previous year with Fernando Salas, all of the Mets).  Using a pitcher in more than half of a team’s games over any stretch is a recipe for long-term disaster.  I do not blame the 2018 Mets’ fall from grace (after an 11-1 start) solely on a tiring bullpen, but this factor certainly did not help matters.  Therefore, MLB teams could benefit from employing pitchers, unlike Luis Avilan, who can pitch several innings and would thus appear only once every three games or so.

Meanwhile, I would like now to return to the starting-pitcher part of the equation.  Obviously, having Jacob deGrom is a huge benefit to any pitching staff.  Jacob deGrom is one of my all-time favorite Mets to watch, and he is the best Mets pitcher whose prime I have had the privilege of enjoying. However, when people compare deGrom to Doc Gooden or Tom Seaver (or other teams’ greats, like Bob Gibson or Sandy Koufax), I cannot help but think of how many games those guys completed.  Those pitchers threw many more innings over the course of a season than pitchers including deGrom do nowadays.  Plus, it was not just Seaver and Gooden who were throwing many innings back in the day.  The other pitchers on the 1969 and 1986 Mets staffs (Koosman, Gentry, Darling, Fernandez, and Ojeda being the main ones) all regularly pitched 7, 8, and 9 innings.  Those pitchers would exit games when they started to become ineffective, not because of innings counts or pitch counts.

Along that line, if modern teams could alter their philosophies so that pitchers become accustomed to throwing 130 – 140 (I would even settle for 110 – 120) pitches in minor-league starts, perhaps we could cultivate a bunch more pitchers (like those mentioned in the previous paragraph) who can throw 7 – 9 innings in MLB starts.  These pitchers do not even have to dominate like deGrom.  In my rotation, I would gladly take a guy who regularly throws 8 or 9 innings and pitches to an ERA of 4.50.  After all, 6 innings and 3 earned runs is a quality start.  Therefore, prorate that to 9 innings, and the pitcher allows 4.5 runs.  No, these 4.50-ERA guys are nowhere near deGrom’s stratosphere in terms of success nor value, but there is certainly a place for the 4.5-ERA innings eater somewhere else in my starting rotation.  That place definitely earns a spot in my rotation before the 6-inning 4.50-ERA guy.  I would love to have any guy who keeps me from overworking my bullpen.  That provides a huge advantage in the next game or two when the bullpen is rested.  Plus, there is a long-term benefit of having a generally rested bullpen over the course of the season.

On that note, I think I have finished my “Moneyball” point.  Brad, I know you are reading this.  I really hope that Jennifer and you are making things work.  The two of you always go great together, and I personally would take Jennifer over Angelina every day of the week.  Jennifer is extremely good-looking and gets better with age.  Plus, she is very very funny.  In a related story, flame-throwing pitchers with nasty stuff are great, and a team needs guys like that.  However, you should also spend more time developing guys who can pitch well enough but can also pitch several innings.  I want relievers who can go 2 or 3 frames, and I want starters who can go 8 or 9.