The argument that everybody seems to hate, but still can’t stop talking about…Is LeBron James better than Michael Jordan? The truth is, there’s no way to determine who has had a better career until LeBron closes up shop for good. LeBron still has three to four solid years left, and maybe five to six total. A lot can happen in that time. Randy Johnson won four straight Cy Youngs from ages 35-38, Barry Bonds won four MVPs from 36-39, and Kobe Bryant scored 60 points at 37. Sometimes, players get better with age (in Barry’s case it was just a lot of steroids, but I think that hurts my point more than it helps, so we can ignore that).

People argue that just because LeBron takes 12U town recreation teams to the Finals every year that he needs to be crowned the best. Others say that although MJ didn’t make it to the Promised Land every year, he was 6-0 when he did make it, and should be deemed the GOAT. Who knows where Jordan would have been without Pippen? But, LeBron has lost five times in the Finals. Great debate. Both sides have some legs to stand on. Lots of potential and ammo for a light-hearted, casual sports conversation at your local BBQ to get unnecessarily out of hand as both sides get way too passionate and end up fighting each other in the grass while their wives and kids watch. LeBron could be better than MJ, or vice versa, but neither beat a pointless sports argument that diminishes the respect your loved ones have for you. That’s what Memorial Day is all about.

With all that said and done, there’s one one argument that I never hear, and I just can’t figure out why. The argument is the whole Michael Jordan playing baseball thing. Do people just like, not remember that? If you want to compare careers, how can you forget the whole “stopped playing in his prime” aspect? It seems wildly important, for both sides involved.

LeBron left the Cavs to play for the Heat and fans almost imploded from hatred. Imagine if he left the entire NBA to go pursue that football career he’s been teasing us with for ten years? I think Skip Bayless would actually be speechless for the first time in his life. Regardless, you’d have to agree that the decision alone would need to have an impact on his legacy.

Michael Jordan ACTUALLY did that. He QUIT BASKETBALL. Here’s proof:

I don’t want this to sound entirely negative to MJ, because there are pros and cons to the whole situation:

For all things considered, MJ had a decent 1994 season:

He pretty much came raw into a sport that has been recognized as one of the more difficult to master and put up average to slightly below average numbers. He wasn’t a slouch by any means, and was rather effective on the basepaths with 30 stolen bases.

After trying to follow his passion, which is something I give him credit for, he returned back to the NBA and dominated once more. As a two-year, two-sport athlete in high school, I can safely back MJ up by saying that it’s not easy to perfect your game when you want to focus on so many specific parts in both sports. The fact that he was able to leave and come back without losing a stride is impressive.

Also, Space Jam was an amazing movie and if he never quit basketball, we might have never gotten that gem. LeBron can’t top that. 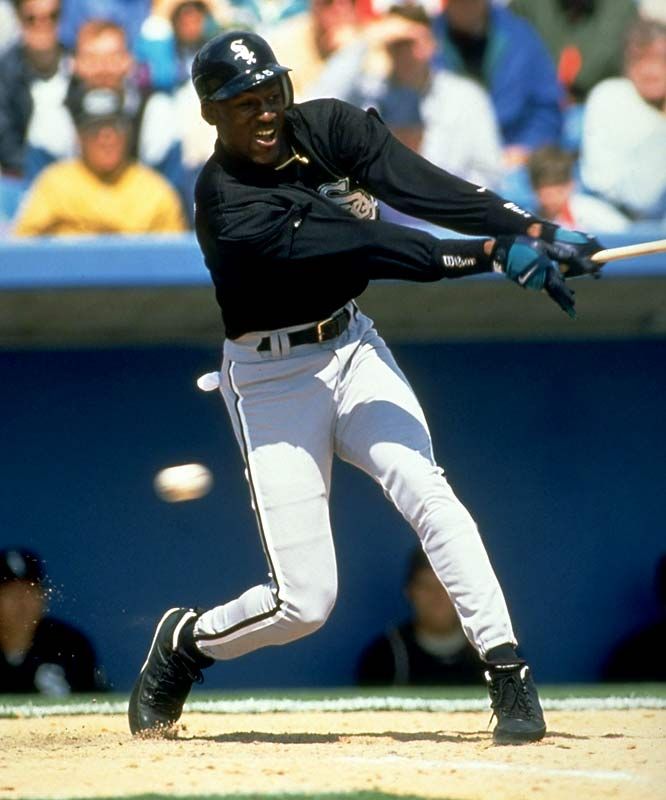 I know I said he wasn’t a terrible minor leaguer, but let’s not take that too far. He wasn’t good. You saw him in Space Jam. He was a liability at the plate day-in and day-out, and it’s sad he left his famed career to be below-average. It just sort of ruins your perception of him as an athlete. At least with LeBron, we can leave it up to the imagination what he would be like in the NFL (probably unreal).

He also left his team, and then came back with the expectation that everything would be the same. If your girlfriend dumped you for somebody she liked more, then she dated that person for a year, then that other dude basically told them her she sucked, and your ex-girlfriend came crawling back to you immediately after, you’re telling me you’d be pumped? You’d tell her to kick rocks 10/10. MJ is a user, and was spoiled by his era. LeBron has had to deal with a lot more hate than this…

Bottom line, the “Michael Jordan quitting basketball” is an argument that needs to be considered in future MJ vs LeBron discussions, and I cannot fathom how people don’t bring it up more.