Heading into the MLB and NFL playoffs, I did not write much in the way of previews.  I figured that the other esteemed writers of the “Below the Belt Sports” staff had done a stellar enough job on their own.  Shockingly though, I am the only one on the blog writing about this year’s Stanley Cup Playoffs.  Go figure!  Therefore, allow me to cover two topics – how I expect the Devils, my favorite team, to do and how I expect the playoffs to turn out.

First of all, I am extremely pumped that the Devils are back in the playoffs.  In a sport in which more than half the league (16 out of 31 teams this year, 16 out of 30 teams before this year) makes the playoffs, six years out of the playoffs is an eternity.  Making the stretch feel worse was the fact that, from 1990 through 2012, the Devils missed the playoffs exactly twice.  That is all in the past now.

This year’s Devils team has been a thrill to watch.  Whenever the team is down by a goal or even two goals, I fully expect the team to come back.  No, the Devils’ defense is not amazing.  Scott Stevens, Scott Niedermayer, and Brian Rafalski are not playing back there, but the defense – led by the smooth-skating Sami Vatanen – is solid enough to back an excellent offense.  Taylor Hall has been a Hart Trophy candidate (for MVP), racking up 39 goals and 93 points.  If one looks at the Devils’ stats, one will see a large drop off from Hall to everyone else, but that does not mean that the team lacked offense behind Hall.  Nico Hischier put up 52 points in a rookie season in which he played like a veteran from Day 1.  Will Butcher earned 44 points, an excellent total for a rookie defenseman, and Kyle Palmieri tallied 44 points as well (but missed 20 games to injury).

All season long but especially down the stretch, the Devils found plenty of depth scoring.  While there were no gaudy numbers beyond Hall’s, 9 other Devils did reach double figures in goals.  Many of those goals were huge.  Down the stretch, the Devils played several weeks of playoff-like games, and the team received huge goals from the likes of Blake Coleman, Stefan Noesen, Miles Wood, and Pavel Zacha.  Patrick Maroon, acquired at the trade deadline from Edmonton, has been a physical beast and has settled nicely onto a line with Wood and Zacha.  Michael Grabner, also acquired before the deadline, has provided great speed and countless breakaways.  Of course, he never ever ever scores on those breakaways, but he is due.  Throw in the steady two-way play of Travis Zajac and Brian Boyle, and the Devils have a great offensive corps.

While the Devils finished the season with 97 points and the #8 seed in the East, I think these numbers undervalue the current Devils team.  The Devils’ worst stretches of the season coincided greatly with games that Taylor Hall missed and games in which the team’s goaltending was downright abysmal.  Keith Kinkaid was underwhelming early in the season; Corey Schneider has been underwhelming in 2018; but Keith Kinkaid has been on fire since ascending to the #1 role in late February.

In fact, for most of this season, I repeated, “The Devils could be a Cup contender if I had any faith in the team’s goaltending holding up for 4 rounds.”  Of course, I did not have that faith for much of the season.  I do now.

To be clear, I am not saying that the Devils will win the Stanley Cup.  They will be underdogs in every series that they play, and they will have home-ice advantage in none of those series.  That said, when I say “underdogs”, I do not mean “#16 vs. #1 in NCAA Tournament” “underdogs”.  I mean that the Devils will likely be given a 40% chance of winning each series.  Yes, that makes the Devils underdogs, but it also means that they could legitimately win any series in which they play.  Therefore, without further ado, I shall now unveil my playoff predictions:

Devils over Tampa Bay in 7: The Devils went 3-0-0 (OK, 1-2-0-0 by my 3-2-1-0 points system) against Tampa Bay this year.  Both teams are fast teams with strong offenses.  The Lightning have a stronger defense, led by Victor Hedman, but the Devils can win this series if Kinkaid keeps up his strong play.

Boston over Toronto in 7: This should be a delightful series between two evenly-matched teams.  I give Boston the edge because of Tuukka Rask and having Game 7 at home.

Washington over Columbus in 5: You know how I feel about the value of non-regulation wins.  Columbus had 15 of them and would have finished 6 points behind Florida and outside the playoffs with a 3-2-1-0 system.  That means Columbus is a “paper tiger, Champ” in this year’s playoffs.  This spells an early exit for the Jackets.

Pittsburgh over Philadelphia in 5: In the NHL, it is tough to have a team pull a Lebron James-memorial “Coast through most of the regular season and turn it on in the playoffs” routine, but I am pretty sure we are seeing it with Pittsburgh.  The Penguins actually turned things on during the last few months of the season, and the playoffs are a much different animal than the regular season.  Plus, after back-to-back Cups, the Pens should actually feel relaxed as if they are playing with house money.  Bye bye, Philly.  No more greased poles for you.

Nashville over Colorado in 5: Colorado is similar to the Devils in that an MVP candidate (Nathan MacKinnon for the Avs) has led a team to a surprise run to end a playoff drought.  The only difference is that Nashville awaits the Avs.  I am not a homer here.  I would expect the Devils to lose to Nashville in 5 as well.  Nashville’s defense is stacked; its offense is deep; it has Pekka Rinne; and it is playoff-tested.

Winnipeg over Minnesota in 5: Winnipeg is the second-best team in the league.  The Jets are fast, have a strong defense, and have the most underrated goalie in the league in Connor Hellebuyck.  In fact, Hellebuyck is the best goalie I saw this year.  He has the form and calm of a young Martin Brodeur.  No, I am not saying this guy is tied with Brodeur for being the GOAT, but I do believe he is the closest to a Brodeur prototype I have seen.  Minnesota, minus Ryan Suter, will not have enough to beat the Jets.

Los Angeles over Vegas in 7: Just a hunch here.  Everything on the ice has been a breeze for Vegas this year.  The Golden Knights have exceeded expectations all season long and thus have felt no pressure.  All of a sudden, Vegas is now the favorite in a playoff matchup.  I expect nerves and for Vegas to lose its first two games at home.  The Knights will recover to extend the series to 7 games, but Jonathan Quick, Drew Doughty, and Anze Kopitar will pull out their first clutch playoff win in a few years in Game 7.

San Jose over Anaheim in 7: Honestly, I have no idea about this one.  Both are regular playoff teams who have often disappointed in the spring.  I am flipping a coin on this one.

Boston over Devils in 6: Sorry, Devils fans.  Boston has been more physical with the Devils than other teams have been this year.  The Devils have not looked great against Boston.  I give Boston the series win.

Nashville over Winnipeg in 7: Look, many people have said that they do not like this playoff format.  I agree.  This is yet another year in which the best two teams in the conference will meet before the Conference Finals.  My solution: Return to the old format in which the #1 and #2 seeds are division champs, while #3-#8 are given to the next six-best teams in the conference, regardless of division.  This scenario alone would have saved Washington-Pittsburgh for the 2016 and 2017 Conference Finals and would save Nashville-Winnipeg for the 2018 Conference Finals.  I know that the NHL likes having a bracket, so I would be OK with not re-seeding the second round.  I would rather have re-seeding, but I can live without it.  Anyway, I wrote this long thing to hide the fact that I do not have a good reason for picking Nashville other than “Game 7 is in Nashville.”

Los Angeles over San Jose in 6: Unfortunately, Peter DeBoer is taken down as he was in 2012 by the Kings. 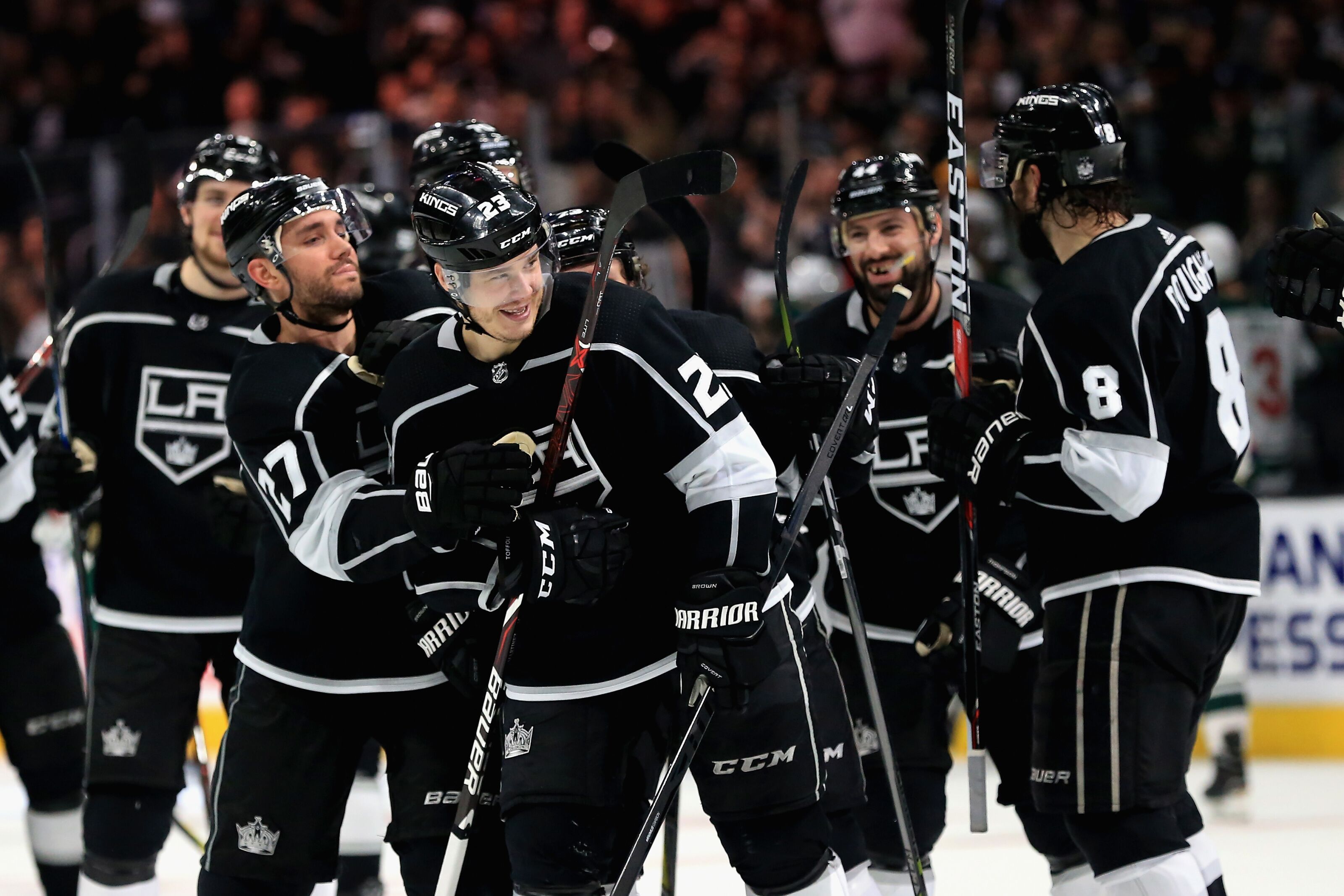 Washington over Boston in 6: Now that Ovechkin has gotten over the Pittsburgh hump, the Capitals confidently roll past Boston and into the Stanley Cup Finals.

Nashville over San Jose in 6: Nashville is the deepest and most balanced team in the West, and this fact reappears against the Sharks.

Washington over Nashville in 6: Sure, Carrie Underwood is easy on the eyes, but karma comes back to bite her for changing “I’ve been waitin’ all night for Sunday night” (a wonderful, albeit factually completely incorrect song) into “Oooooooh, Sunday night” (a brutal song, aside from the fact that she is in the video).  Meanwhile, the Ovechkin train keeps rolling, and #8 finally hoists his first Stanley Cup.

That is what I think.  Hopefully, I am wrong, and the New Jersey Devils end up winning the Cup!