Carson Wentz wants the Patriots to win the Super Bowl.  Do not let anyone tell you otherwise.

Sure, we might hear an interview this week with Wentz in which he says something like, “I’ll be rooting harder than anyone for Nick Foles and the Eagles.”  Sure, reporters will inevitably blow this up into a full-page story about what a great team guy Wentz is, as if he had not simply uttered the obvious cliché line that any player in his situation would say.  However, let us be clear: If Wentz says anything at all about rooting for the Eagles, he is full of you-know-what.    Allow me to explain.

Carson Wentz was an MVP candidate as of the time of his Week-14 injury.  The Eagles were 10-2 at the time and on the verge of an 11th win.  Wentz was injured in the third quarter of that 11th win, and Nick Foles was ultimately behind center as the Eagles scored the winning points.  Thus, the Eagles entered Foles’s first 2017 start with an 11-2 record.   Since that time, Foles has started five games – two dominant efforts (against the Giants and in an otherworldly performance in the NFC Championship game against the Vikings), a solid effort in the Divisional Playoffs against the Falcons, an underwhelming performance in a win against the Raiders, and a bad but brief and meaningless performance in the season finale against the Cowboys.  In the modern NFL, it is not unusual for any starting quarterback to have two dominant games, a decent game, a below-average game, and a bad game over a 5-game stretch. 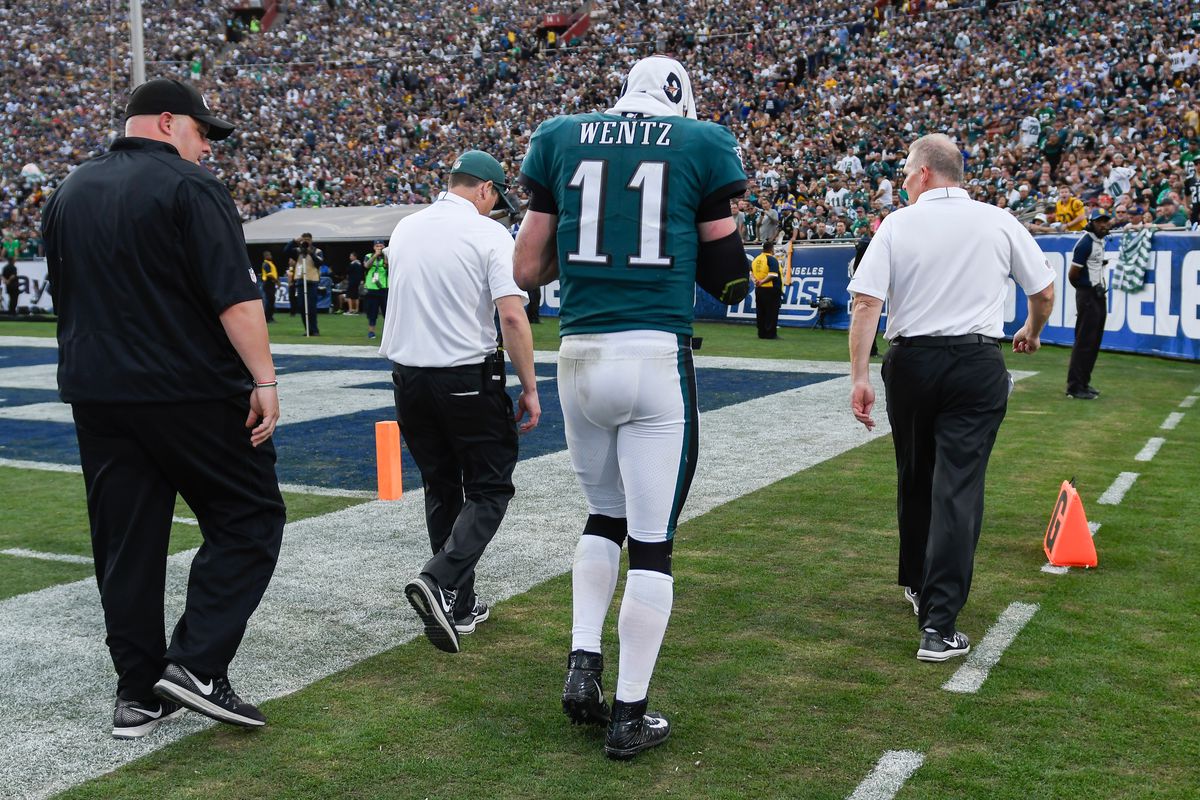 However, it is a big deal that Foles’s most dominant game of this stretch did come in the NFC Championship.  In that game, he threw for 352 yards, 3 touchdowns, 0 interceptions, and a passer rating of 141.4.  That dominant performance against Minnesota has caused many people to shed a more positive light on Foles’s Divisional-Round effort with 246 passing yards and a 100.1 passer rating.  Furthermore, Foles’s win over the Giants saw Foles throw 4 touchdowns and bring the Eagles to a 99% probability of earning the top seed in the NFC.  Therefore, it is easy for Eagles fans to ignore Foles’s bad efforts in Weeks 16 and 17, as the games were essentially meaningless.

That all said, Carson Wentz did lead the Eagles to a 10-2 record this season and had them on the doorstep of 11-2.  Carson Wentz did all the heavy lifting to earn the Eagles the top seed in the playoffs.   In 13 starts, Wentz threw for 3296 yards, 33 TDs, 7 interceptions, and a 101.9 passer rating.  For good measure, Wentz also added 299 rushing yards.  Yes, Foles has had two dominant games and one respectable game over a 5-game stretch, but could Foles have done what Wentz did for 13 games?  I do not know.  Furthermore, if Wentz is as fierce a competitor as Eagles fans would want him to be, Wentz should think that Foles could not have done it.

Additionally, I am sure that Carson Wentz has thought from Day 1 in Philadelphia, “I am gonna be the guy who finally brings a Super Bowl Championship to Philly.  I am gonna be loved and adored in that City forever.   They will love me even more than they love Rocky, and they actually think that Rocky Balboa was a real person.”  Look, I hate the Eagles and hope that they go up in flames on Sunday, but, if the Eagles had drafted me to be their savior quarterback, I am certain I would be thinking the afore-mentioned quote as well.

Anyway, let us now take a quick journey through Carson Wentz’s career in Philly.  He had a strong, albeit losing, first season in Philly.  Then, he went out and dominated Season 2.  By midseason, the Eagles were the clear favorites to win the NFC.  Wentz put the Eagles on the doorstep of clinching the #1 seed, and then BOOM!…He got hurt.  By that point, Wentz’s replacement needed only to win one of three games to guarantee the #1 seed.  That replacement, Foles, took care of business in that first game.  Then, he stunk his way through Weeks 16 and 17.  After that, he played a very pedestrian game against the high-powered Atlanta Falcons.  Foles lead the Eagles to a mere 15 points but lucked out because his defense played a stellar game in holding Atlanta to 10.  The next week, Foles went out and played “the game of his life” against the Vikings to put the Eagles in the Super Bowl.

Now, we do not know what will happen this coming Sunday in Minneapolis.  However, if the Eagles win, Nick Foles will forever be the guy adored by Eagles fans for bringing Philly its first Super Bowl Championship.  It does not matter that Wentz got the Eagles to 10-2 this season.  Foles will be the guy hoisting the Lombardi Trophy.  Even if Wentz ultimately wins (shudder) six future Philly championships as the starter, Foles will always be the guy who brought the city its first Super Bowl Championship.  That has to kill Wentz inside.  In fact, if it does not, and if I were an Eagles fan; I would be mad that my starting QB is not competitive enough!

Now I know many of you might be thinking of parallels between Wentz/Foles and Phil Simms and Jeff Hostetler of the 1990 Giants.  We Giants fans loved Hostetler for stepping in for Simms and winning the last two regular-season games, two NFC-playoff games, and the Super Bowl.  However, we never thought that Hostetler could legitimately replace a healthy Simms (although a QB controversy did ultimately emerge in 1991 and 1992).  The Giants won those five Hostetler starts in the 1990 season on the strengths of an elite defense and a strong rushing attack.  Hostetler did just enough to win.  In fact, the Giants used a formula similar to that which the Eagles used with Foles against the Falcons.  That said, unlike with Foles against the Vikings, Hostetler did not have any “the game of his life” playoff games.

In fact, when I put “the game of his life” in quotes for Foles’ NFC Championship performance, I did so because Foles did go 8-2 in 10 starts for the 2013 Eagles.  He threw for 2891 yards, 27 touchdowns, 2 interceptions, and a passer rating of 119.2.  Wow, those are some great numbers!  Also, Foles threw for 7 touchdowns in one game against the Raiders that year.  In fact, I would argue Foles’ 2013 numbers are more impressive than Wentz’s 2017 numbers, and Wentz knows that such a case can be made.  To the contrary, Jeff Hostetler was a career backup, and neither Simms nor most Giants fans ever felt that Hostetler could outplay Simms for any significant period of time.  Moreover, prior to Hostetler’s Super Bowl victory, Simms had already won a Super Bowl, the Giants’ first.  Therefore, even though Hostetler did win Super Bowl XXV with “Simms’ team”, Phil Simms knew he would remain more legendary than Jeff Hostetler in the minds of Giants fans.   On the other hand, the analogous scenario is not true with Wentz and Foles.  Wentz knows that Foles had an all-time great (by any QB’s standards) season 4 years ago and that Foles was temporarily ruined in 2015 by known QB wrecker Jeff Fisher.  It is not completely unreasonable for a person to think that Foles is better than Wentz…Wentz knows that and cannot be happy about it.  Meanwhile, Wentz does know though that, if Foles loses the Super Bowl, fickle Philly fans will immediately criticize Foles and talk about how they will win the Super Bowl next year when the superior Wentz returns.  Wentz has to know that.

On the other hand, if the Eagles win the Super Bowl, not only does Wentz have to deal with the “scene” of Foles basking in the glory Wentz feels should belong to him……but Wentz also knows that it is actually fathomable that he would then find himself in a “Goddamn arms race” with Foles.  Boom. That is a double whammy that would eat at my soul if I were Wentz.

Therefore, Wentz can say whatever he wants…but, deep down – in his heart, in his brain, and in his soul; he wants to be the guy to bring Philly its first Lombardi Trophy.  Carson Wentz is absolutely rooting for the Patriots.