Every year, when I see the Baseball Hall of Fame ballot, I ask myself two questions about each player on said ballot:

These are the two biggest criteria for me in determining a Baseball Hall of Famer.  (Note: this policy does not quite work for the NFL, because it would essentially mean that I would never vote for a non-skill-position player.)  After I answer the two afore-mentioned questions, I then look at the player’s statistics.  If I have answered “Yes” to the two questions, I consider the player a Hall-of-Famer unless the stats prove otherwise.  However, if I have answered “No” to at least one of the two questions, I consider the player a non-Hall-of-Famer unless the stats prove otherwise.  It is the Hall of Fame, not the “Hall of Impressive Stats”.  Granted, the two usually go hand-in-hand, but Hall-of-Famers should be players who felt like Hall-of-Famers while I was watching them.

Until the “Steroid Era” (loosely defined as 1993 through 2008, aka “Len Dykstra’s magic-pill Spring Training” through Roger Clemens’s “misremembering”), HOF voters generally got things right.  They put the dominant players in the Hall of Fame, without admitting too many undeserving players.  At least, I think the voters got things right.  After all, I saw only the latter years of obvious HOFers’ careers, like those of Tony Gwynn, Nolan Ryan, Robin Yount, and George Brett.  Meanwhile, I did not experience any of the careers of the bulk of Hall-of-Famers.

I started watching baseball in 1990 and have been an avid baseball fan for the past 28 seasons.  It has been a great feeling in recent years to see HOF inductees who played their entire careers during my time as a baseball fan.  This list is headlined by Mike Piazza, Ken Griffey Jr., Pedro Martinez, Frank Thomas, Greg Maddux, Tom Glavine, John Smoltz, and Randy Johnson.  Those names all belong in Cooperstown, but there is a problem.  During the “Steroid Era”, the list of dominant players included the players listed above but also featured non-Hall-of-Famers Barry Bonds, Sammy Sosa, Mark McGwire, Roger Clemens, Rafael Palmeiro, Manny Ramirez, and Alex Rodriguez.  This bothers me greatly.

When I ask myself Questions 1 and 2 from above, six of the seven players listed are slam-dunk HOFers.  Palmeiro is the only player who never struck me as dominant, but he ended up with more than 3000 hits.  That number is an automatic HOF indicator.  Therefore, by that logic, he should be a HOFer as well.  While his 569 homers are less impressive than they would have been in a previous era, the 3000 hit/500 homer combo remains quite impressive.  Again though, none of these seven players (granted, A-Rod is not yet eligible) is actually in the Hall of Fame, and that is a travesty to me.

The way I see it, there are essentially three levels of “steroid guys”.

Level I: “Guys Who Look Like They Probably Took Steroids”

It took a few years, but the Level-I guys are now in the Hall.  Mike Piazza broke that barrier in 2016, and Jeff Bagwell and Ivan Rodriguez followed Piazza’s path in 2017.  Albert Pujols should feel great about this, because he is likely the best “Level-I” guy not yet in the Hall.  I know, I know, Pujols is still playing, but he should be a slam-dunk HOFer someday.

Then, we get to Level II.  This is for guys who were on the Mitchell Report or other steroid reports but never actually failed an MLB-authorized drug test.  It covers people who had to testify before Congress in 2005 and people who ostensibly had Androstenedione in their lockers while chasing homerun records.  Yes, this list covers Mark McGwire.  It also covers Sammy Sosa, Barry Bonds, Roger Clemens, and David Ortiz.  While Ortiz will not be on the ballot for a few years, he will get into the Hall of Fame because everyone loves him.  That said; the other four guys should also absolutely be in the Hall of Fame.

When I talk about being a “dominant player”, I compare players to their contemporaries.  It is silly to compare numbers from the “Steroid Era” to players from other eras.  This is why a guy who averaged 25 homers per year in the 1960s has a better resume than a guy who averaged 25 during the “Steroid Era”.  However, “hitting 25 homers” was not the case with McGwire, Bonds, and Sosa.  McGwire and Sosa hit 70 and 66 homeruns, respectively, in 1998. Even among league-wide bloated homerun totals, these two guys managed to shine. They even helped greatly to resuscitate baseball three years after the strike.  For the last two months of the 1998 season, fans all over the country – myself included – tuned in whenever the Cardinals or Cubs were on TV.  We wanted to watch these two guys make history and break Roger Maris’s single-season homerun record.

By the way, we all knew that something was up with McGwire and Sosa.  I am not saying that we all knew that they were on steroids.  However, most of us knew that something shady was happening, and guess what?  We didn’t care!  More importantly, MLB did not care.  Likewise, when Barry Bonds hit 73 homeruns in 2001 and ultimately made his way to a record of 762 career homeruns, many of us did not care either.  As for Roger Clemens, I cannot stand the guy.  Maybe one could argue that he accidentally beaned Piazza in the head, but there is no defense (other than him being on steroids) for Clemens throwing a bat at Piazza.  Goodness gracious do I hate “Rogah”, but he did win seven Cy Young Awards.  Yes, we have a Baseball Hall of Fame; we have a guy with 7 Cy Young Awards; and that guy is not in the Hall of Fame.  Similarly, Barry Bonds is a 7-time MVP.  7-time!!!   Plus, he has a career batting average of .298 and was a great defensive player.   These men need to be in the Hall!  Also, for good measure, Sammy Sosa won an MVP as well, in 1998. From 1995 through 2002, his homerun totals were 36, 40, 36, 66, 63, 50, 64, and 49. He should be in the Hall too!

Some HOF voters did not vote for McGwire on the grounds that he was too one-dimensional.  I would argue that his one dimension (homeruns) was so great (11th all time in homeruns) that he should be a Hall-of-Famer anyway.  (and yes, I did just break my rule of comparing a player to players from different eras)  In his career, he had single-season homerun totals including 70, 65, 58, 52, 49, and 42.  Like with Sosa and Bonds, his single-season homerun totals look impressive in any era.  Regardless, in the late ‘90s, the eight most dominant players in baseball were these four guys plus  Hall-of-Famers Griffey, Pedro, A-Rod, and Maddux.  All eight should be in the Hall of Fame. 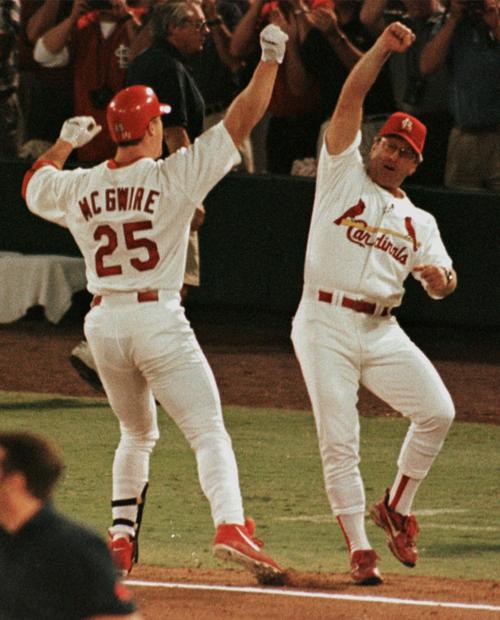 I believe that at least 90% of players from the “Steroid Era” used at least one banned substance.  I do not have proof of this, but I base it off human nature.  MLB turned a blind eye in the late ‘90s and early 2000s while everyone knew players were abusing steroids.  What would you have done if you were a player at that time?  Would you have stayed “clean” while everyone around you had bulked up unnaturally, begun hitting more homeruns, and earned bigger contracts?  The ethical decision is to say “Yes”.  The answer in favor of your long-term health is to say “Yes”.  However, if you knew that you could make a lot more money for your family at the expense of a sliver of morality and potential long-term health issues, you would have likely taken steroids too.

This is why I blame MLB, not the players, for the steroid abuse.  To be clear, I am in no way condoning steroid use.  Taking steroids is a horrible, horrible choice to make for your life.  However, most people who take steroids do not have the potential of earning millions of dollars as a reason to do so.  If the reason for your taking steroids is that you know your family will be covered financially for the rest of their lives, I cannot criticize your for making that choice.  Also, let us not act like all eras of baseball have been so sacrosanct.  As Colin Quinn’s character discusses in Trainwreck, Babe Ruth never faced an African American or Hispanic pitcher during his entire career.  Until Jackie Robinson broke the color barrier in 1947, white players never faced some of the greatest players in the world.  Meanwhile, in the 1970s and 1980s many players popped amphetamines (and did cocaine) like they were M&Ms…..but sure let’s vilify only the “Steroid Era” and keep only guys from that era out of the Hall of Fame.  That makes total sense.

To the contrary, I feel it is the job of the Hall-of-Fame voter to admit the dominant and legendary players, while it is the job of the Hall-of-Fame visitor to provide the context – positive or negative – he or she is warranted for each player.  In other words, many people probably visit Ty Cobb’s plaque and talk about what a horrible person and racist he was, but he still has a plaque.  Now, people can visit Tim Raines’s plaque and talk about how his nickname “Rock” came from his poor decision to keep a rock of cocaine in his pocket (while playing!).  Visitors can judge him for that, but his plaque remains.  Likewise, HOF visitors should be able to look at McGwire’s, Sosa’s, Bonds’s, and Clemens’s plaques and talk about the unsavory choices they made with steroids in their careers….but the plaques should be there.

With that, we now arrive at our Level-III candidates.  While I criticized MLB for allowing steroids to run rampant during the Steroid Era, I applaud MLB for cracking down on the matter over the past ten years.  Now, steroid issues involve actual failures of drug tests, not speculation.  Thus, I feel that, if a player has failed an MLB drug test, this occurrence should certainly affect his HOF candidacy.  How much should it affect his candidacy?  It depends upon how good the player was and how many tests he failed.  For example, Manny Ramirez and A-Rod are two of the greatest players of the past 30 years.  Since they would be sure-fire HOFers with no steroid issues, their candidacies can withstand these major black marks on their resumes.  However, if someone like Mike Mussina (who I consider a borderline “Yes” for the HOF) were to have failed a drug test, that negative on his record would have knocked him down to a “No” from me.  Don’t worry, Mike.  I don’t actually think you took steroids.

Anyway, now that you know my stance on steroids and the Hall of Fame, here is my hypothetical vote for the 2018 Hall of Fame Induction:

My Fictional Hall of Fame Votes

2 thoughts on “Steroids and the Baseball Hall of Fame”