Well that couldn’t have gone any worse, could it? In the AFC championship game, the Jaguars almost did what America so desperately wanted and knocked off the Patriots. Unfortunately, almost is they key word in that sentence, and Tom Brady & company came back from a ten point fourth quarter deficit to secure their eighth AFC Championship in the Brady & Belichick era. I wanted more than anything for this guy to be in the Super Bowl,

Tom Brady: Wrote a book and developed an app about “achieving a lifestyle of sustained peak performance.”

Blake Bortles, the man America relies upon to defeat him: pic.twitter.com/id5eHqXeJX

but the Football Gods decided Brady would represent the AFC for the third time in the last four years. This tweet I came across last night is also absolutely insane

Since 2003, only FOUR different quarterbacks have won the AFC Championship.

I mean, that’s unreal. For a league that prides itself on parity and having everyone be relatively competitive, having only four quarterbacks represent an entire conference over a 15-year span is bananas. Regardless, if you had said at any point in the last year that Brady would be an AFC champ again, no one would blame you.

So as a Giants fan, or really any team, obviously the Patriots winning was not what you wanted. Rooting against the Patriots is like hitting on a girl that’s out of your league. You know how it’s gonna end the whole time, but then they give you a little glimmer of hope that maybe it’ll be different this time, only for it to end exactly how you originally thought. Moral of the story? The Patriots will always win and I will always get curved by girls but that is neither here nor there.

In the NFC game, you had the Vikings coming off one of the craziest finishes to a game probably ever, against the Eagles who have been thriving in the underdog role ever since MVP hopeful Carson Wentz tore his ACL. Although many people counted them out from that moment, “Big Dick” Nick Foles has more than risen to the challenge and has now put the Birds in the Super Bowl. I feel like I was pretty much in the same boat as most people thinking it would be a close game. The Vikings had momentum (and maybe a bit better of a team) on their side, the Eagles had home-field advantage. Well, that’s not what happened at all, and the Eagles handed the Vikings what my housemate and resident BTB hockey blogger Philly Phil would call a “Bully Beatdown.”

So us Giants fans are stuck in a pickle here. Super Bowl LII, Pats vs. Birds. Who do we root for? Let’s weigh our options.

The Case to Root For the Patriots

1. We’re Conditioned to Block Out Their Wins at This Point

Obviously no one likes it when the Patriots win. But you just know it’s coming at this point. If Brady wins another Super Bowl in two weeks, does it really matter anymore? The guy already has five. Not trying to take anything away from him because obviously every Super Bowl is an outstanding accomplishment, but you could tell me Brady’s gonna win twelve Super Bowls at this point and I’d believe you. Realizing the Patriots are probably gonna win the Super Bowl is the same as knowing the Knicks will be garbage every year. At a certain point it happens so often you just become numb to it.

2. Eli Would Still be the Only QB to Ever Beat Brady on the Big Stage

I’ve let it be known before that every sports highlight is better with Celine Dion’s My Heart Will Go On set to it, and this video is no exception. Brady scoffing at the notion that the Giants defense could hold the Pats’ offense in check at the beginning is also a great touch. But every Giants fan obviously knows how incredible it was to win those games (XLII especially, not to say XLVI wasn’t awesome but ruining their perfect season was the cherry on top of that game), and it’s something only Giants fans can say. Eli Manning is the only one to have beaten the Greatest QB of All-Time in the Super Bowl, and he did it twice. I’m no mathematician, but I know that if Brady is considered the GOAT, and Eli beat him in the championship game twice, then Eli must actually be the GOAT. No, I’m just kidding, but every Giants fan knows the pride that comes with saying your team is the only one to beat Brady on Super Bowl Sunday, and it’s the one thing that somewhat softens the blow whenever you see Brady get up on that podium and hoist the Lombardi.

3. The Eagles are Our Bigger Rivals

Sure, the G-Men have played the Pats twice in the Super Bowl. But we won both times. They’re in the AFC, we’re in the NFC, therefore we only play once every four years. It’s the same reason I don’t really consider the Jets our rivals. Well, that, and the fact that they are one of the saddest excuses for a franchise in North American sports (see also: Browns, Mets, Marlins.)

But we play the Eagles twice a year. They’re our division rivals. They’ve given us some heartbreaking defeats lately. Remember this one from when we actually still believed we could be a functioning football team in 2017?

Stayed with the Celine Dion there, don’t really know why. But that was a BRUTAL moment for us Giants fans. And who could forget this?

To this day, you can say “Fuck Matt Dodge” at any Giants tailgate/game and surely get a bunch of fans agreeing with you. So given everything I just said, how could you root for the Eagles?

There’s still no shot anyone with a brain wants to see the Patriots win the Super Bowl. These are the same guys that got caught with Spygate and Deflategate. Their fans are insufferable. They win literally every year. The last thing anyone wants to see is them win another Super Bowl, regardless of who they’re playing.

2. I Hate Boston Sports Much More Than Philly Fans

I’m a baseball guy first. More specifically, a Yankees guy first. You know who our main rival is? The Boston Red Sox. In fact, that’s perhaps the best rivalry in professional sports. You know who else Red Sox fans root for? The Patriots. Any success for Boston sports makes me sick. Pictures like this showing how much recent success they have make me want to vomit. 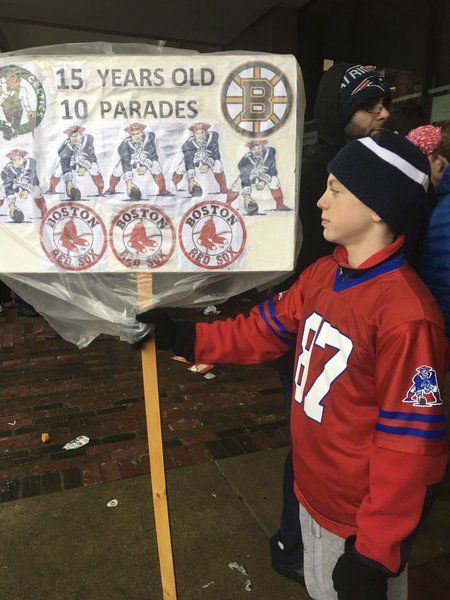 The Patriots win every year. The Red Sox have won three since ending the Curse of the Bambino in 2004. The Celtics may be the best team in the East this year. And the Bruins sit near the top of the NHL standings. Seeing these fans get to enjoy yet another parade doesn’t get any easier, even if seeing Brady hold the Lombardi does.

I stand behind what I said that I’m pretty much immune to the Patriots themselves winning Super Bowls. I’ve seen them win five, what’s six or seven or even twelve gonna change? But what if it’s even more than that? What if Brady plays until he’s 80? Super Bowl 100 rolls around and they’re just still winning every single year? Call me crazy but that’s the way it’s looking at this point, and if an Eagles win could do one thing it would at least slow them down for now.

Conclusion: I came into this blog thinking I was gonna root for the Eagles. As started writing, however, the Patriots started to make more sense. However, I’ve come to a conclusion that I think every Giants fan can get on board with: drink a lot of beer on Super Bowl Sunday, hope your box pool numbers hit, and watch Saquon Barkley highlights on your phone in hopes that he’ll be a Giant in a few months. I can definitely get behind that plan.