After a 70-92 2017 season, the Mets have left most of their fans expecting a rough 2018 campaign.  Since the end of last season, the Mets have more or less kept the team intact.  The three notable changes have been hiring Mickey Callaway as manager, signing reliever Anthony Swarzak, and signing Jay Bruce (whom the Mets traded away in August).  While I like the Swarzak and Bruce moves (and the jury is out on the Callaway move), let us not act like these moves make the Mets major playoff contenders.

Let us examine the hypothetical world in which the 2017 Mets had Anthony Swarzak and did not trade away Bruce in August.  At best, that Mets edition might have been 5 games better than the actual 2017 team.  This is a very generous “at best”, but I will go with it.  In that case, the 2017 Mets would have finished 75-87.  Keep in mind that the 2017 Mets had Jose Reyes for the full year and Neil Walker, Lucas Duda, Curtis Granderson, and Addison Reed for most of the year.  All of those players are now either gone or currently free agents (whom the Mets could potentially sign).  While none of those players is going to set the world on fire by himself, those five players nevertheless represent a great deal of talent to lose.  The Mets would have likely been at least 4 games worse without them for the full 2017 season.  Meanwhile, the Mets would have likely been at least 5 games better last year with Noah Syndergaard healthy all season.  The sum of those alternate-reality scenarios would have put the Mets at 76-86 last season. 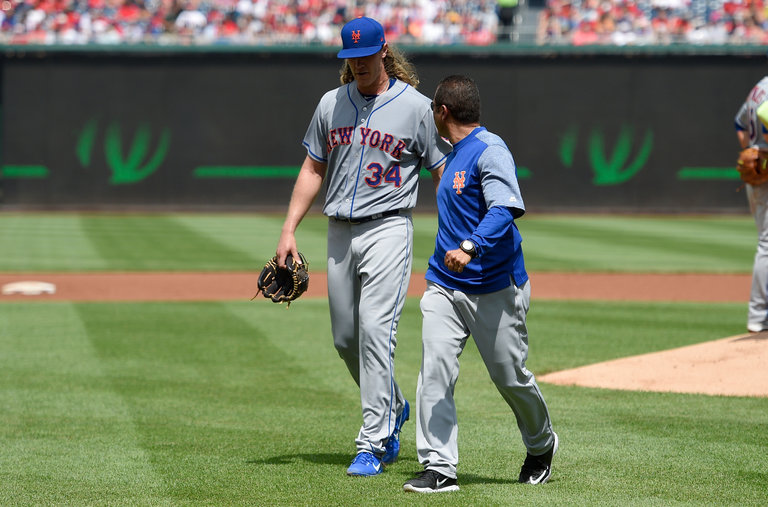 That “76-86” mark is important, because that is the record that I feel the current Mets would have attained if they had played together for all of 2017.  Therefore, how are the Mets to improve by 14 games to gain a playoff berth in 2018?  One way would be for the Mets to go out and sign big-time free agents at catcher, second base/third base, and starting pitcher.  Wait, why are you laughing so profusely???  Oh yeah, that’s right.  The Wilpons have too much debt and never spend a lot of money.  Therefore, that “spending lots of money” option is off the table.  Forget about Yu Darvish.  Forget about Lance Lynn.  Forget about Mike Moustakas.

Anyway, since bringing in high-priced talent is off the table, the Mets must get creative.  I do feel they have a set of moves that can bring the club to 90 wins.  Within their budget, I feel their best option is to do the following four things:

In fact, I think that the Mets’ strongest offensive/defensive lineup (if they bring back Reyes) would actually be:

At the same time, a bench with Smith, Brandon Nimmo, Flores, and Rivera is fine with this lineup.  Meanwhile, Yoenis Cespedes is clearly a front-runner.  With a good team, he is inspired to be a great player.  With a bad team, this is far from the case.

In the end, I am not saying that the aforementioned moves would guarantee the Mets a playoff berth.  However, I do feel that the combination of a healthy and more motivated Cespedes, a healthy Conforto (he did miss the last six weeks of 2017 too), 30 MLB starts from R.A. Dickey (as opposed to a potential of 30 starts from fringe MLB pitchers), slightly healthier seasons by Matz and Lugo, an improved Amed Rosario, the return of Jose Reyes, and a revamped bullpen make it possible that the Mets earn those 14 extra wins needed to reach 90 and a likely playoff berth.