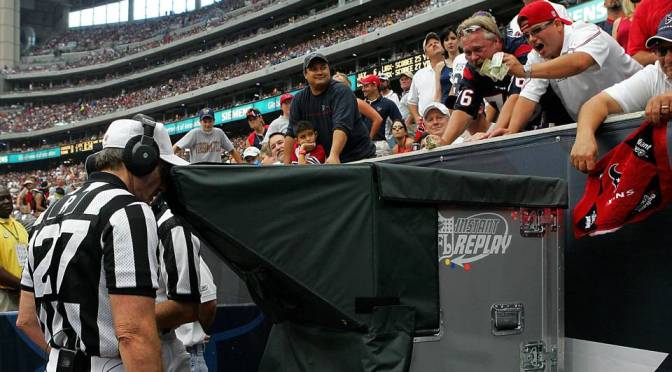 That said, it is tough to legislate exactly when it should or should not be necessary to “complete the catch to the ground”.  By the letter of the law, the guy who loses the diving catch as he hits the ground is in the same circumstance as Jesse James on Sunday night.  After all, Jesse James* did not technically have possession yet as he dove for the end zone, just as a receiver trying for a diving catch does not have possession yet when the ball hits the ground.  However, we all generally feel that the former is a catch, while the latter is not….but how do we fix this?

In my mind; since it is tough to change the “complete the catch to the ground” rule to cover all circumstances appropriately, we need instead to implement a “one-minute replay” rule…..and we need it in baseball, football, and basketball.  An official/umpire/referee should get one minute to watch replays.  That is all.  Within one minute, an official can overturn an obvious knee hitting the ground before a fumble, a ball short-hopping before entering a receiver’s or outfielder’s hands, a foot on or off the three-point line, a second foot on or off the sideline, or a “safe”/”out” call.  Of course, “obvious” is the operative word here.  An obvious bad call will be easily overturned within a minute.  However; if a call cannot be overturned in a minute, then the call on the field could not have been that egregiously bad, and we should stick with the call on the field.

One minute would not have been enough time to overturn the Jesse James play, the Dez Bryant catch, or either of this year’s Seferian-Jenkins plays.  Needless to say, most of America outside of Massachusetts and Wisconsin would have been pleased to see these calls on the field stand.  Moreover, if you think we need this rule in football – with a 16-game schedule – then you know we really really really need it for baseball and its 162-game schedule.  Find me one person who wants to watch a five-minute replay to see if a base-stealer’s butt came off second base for a split second before his hand touched the base.  Stop it.  Nobody wants that.  Likewise, as a veteran of four years of umpiring in the Midland Park Baseball Association in the late ‘90s, I know that a first-base umpire is to listen for the sounds of the runner touching first base and the ball entering the first base glove’s pocket.  Whichever “pop” comes first dictates the call, yet now we are subject to five-minute soundless replays where we break things down to super-super-super-super-duper-slo-mo.  (Even if the sounds are actually the most reliable evidence in some cases)  Again, that is not the spirit of replay.  Replay is for Denkinger, Galarraga, and Beltran (in Santana’s no-hitter); it is not for the afore-mentioned garbage.

2) NFL teams should be able to challenge penalties. It is ridiculous that replay can take away ASJ’s seemingly obvious Jets touchdown and give the Pats the ball, while replay cannot overturn an egregiously terrible 50-yard pass-interference penalty.  It is my understanding that 31 of 32 NFL coaches usually turn down the proposal of being able to review penalties.  Bill Belichick is the only one who votes in favor of it.  Apparently, NFL coaches do not want to have to worry about something else, while Bill Belichick knows that, being so much smarter than the other coaches, he will be better than the other coaches at challenging penalties too.  I have watched enough bad coaches over the years to know that he is correct, but that does not change my view in the slightest.  Furthermore, I feel that the rookie coaches like Sean McDermott, Sean McVay, and Kyle Shanahan are much smarter than old coaches in terms of game scenarios (when to punt, when to kick a FG, when to go for the first down, when to kneel, when to tell the running back to stop before the goal line, etc.).  Therefore, they would probably be better at knowing when to challenge penalties too.  Regardless, nobody likes to see games decided by phantom holding, illegal-block-in-the-back, unnecessary-roughness, or pass-interference calls, and many of these penalties are game-changers.  Therefore, they should be subject to replay, just like anything else.

3) NHL offsides should not be reviewable once the defensive team has possessed the puck.  I left the NHL out of the “one-minute replay” rule because the bulk of NHL reviews deal with whether or not a goal is legitimate.  In a sport in which a team scores an average of fewer than three goals per game, the league cannot afford to get a goal-call wrong.  Plus, NHL games have a fast pace and rarely last beyond 2.5 hours.  Thus, the NHL can withstand a few longer replays for a good cause.

However, it is ridiculous that a team can have a goal called back because the team entered the zone offside two minutes prior.  Therefore, the league should change the rule such that, when replaying a goal, the officials may watch footage back to either the moment when the puck entered the offensive zone or the moment when the defensive team most recently possessed the puck – whichever of the two is most recent.  This way, replay will continue to overturn goals on clearly-offside odd-man rushes.  However, it will eliminate most cases in which the offside entry happened well before the goal.  If a defensive team has had the chance to clear the puck but has not been successful in doing so; the defense, not the offside entry, is responsible for the goal.  Thus, the goal should stand.

4) If an offensive player fumbles the ball into and then out the opposing end zone, it should be considered a loss of down with the fumbling team getting the ball at the other team’s 20-yard line. This is my proposed change for the Seferian-Jenkins/Pats and Derek Carr plays.  In sports as in life, the punishment should always fit the crime.  If the defense has not recovered a fumble, why should that team get credit for a turnover?  Furthermore, if the fumble goes out of bounds before the pylon, the offensive team keeps the ball at the 1-yard line.  However, if the fumble hits the pylon or goes out of bounds slightly beyond the pylon, the defense gets the ball.  To quote Jackie Chiles, this seems “capricious and arbitrary” to me.  My plan continues to punish the fumbling team, in that the next down takes place at the 20-yard line.  However, the team maintains possession.  If the fumble happens on 2nd and Goal, the next play will be 3rd and Goal from the 20, and so on for other downs.  If the fumble happens on a play that gains the first down, the next play will be 1st and Goal from the 20.  Of course, if the play happens on fourth down, the defensive team takes over possession at its own 20-yard line.

With this change, the punishment will fit the crime.  The fumbling team suffers a loss of yardage, but it maintains the likelihood of earning at least a field goal.  That seems reasonable to me.  Also, I did hear Bill Simmons mention a similar idea to this in a podcast a few weeks ago, but I swear I thought of this before hearing him.  That said, I just want the world to be a better place.  If this rule change happens, I do not want any credit.  That is all Bill’s.  I will be a happy man knowing that society is better off.

5) In the NHL; the “delay of game” penalty for shooting the puck over the glass while in your own zone should apply only if you have possession of the puck. In other words – if a defenseman takes a whack at an uncontrolled puck, and the puck goes over the glass; that should not be a penalty.  That is not the spirit of the rule.  The rule is intended to deter players from deliberately sending the puck over the glass in order to get a stoppage in play.  If the player simply hits an unpossessed, loose (and often bouncing or airborne) puck; he is unlikely intentionally sending the puck out of play.  Therefore, that should not be a penalty.   Only if the player has control of the puck and shoots it over the glass should a penalty be called. 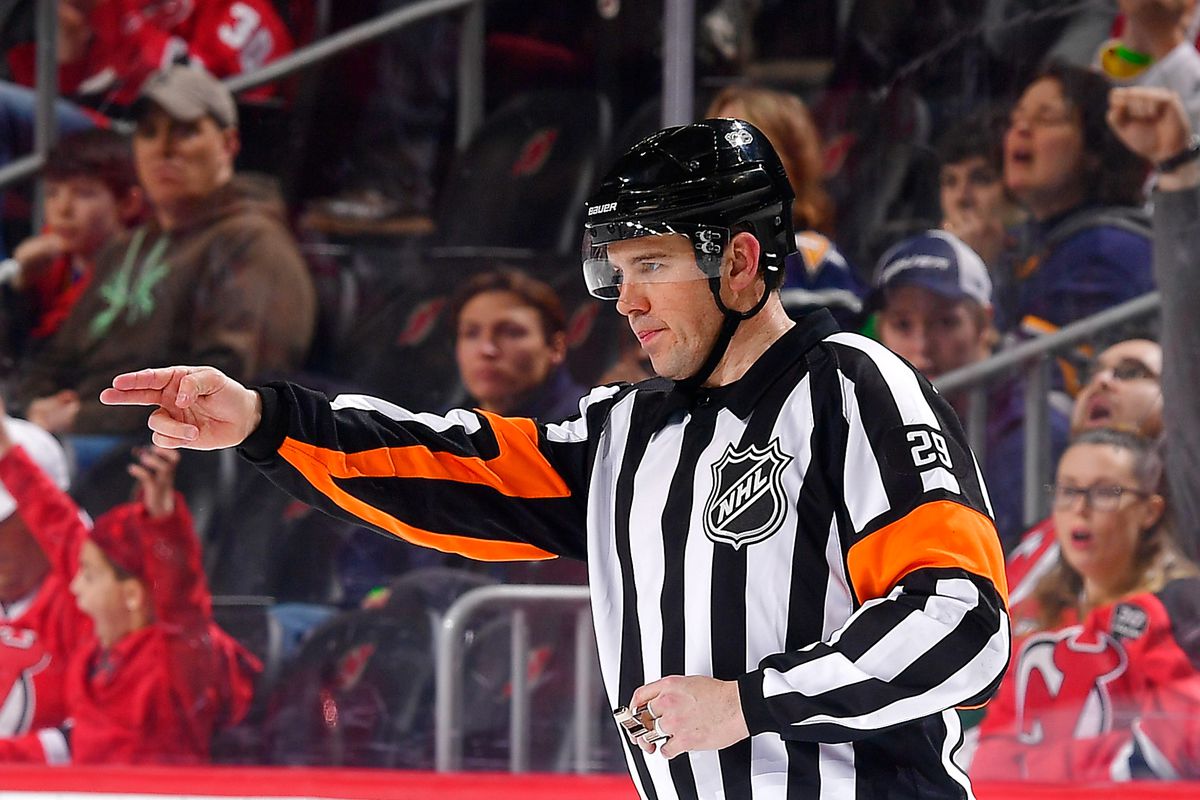 6) On NFL Sundays, there should always be at least 4 4:00 games. I don’t get it.  When I was a kid, there was better balance between the number of 1:00 games and the number of 4:00 games.  However, that was before DirecTV and RedZone and thus before we NFL junkies could reap the benefits of having multiple games at a time.  Nonsensically, now that we have these wondrous viewing creations, the NFL too often saddles my idol Scott Hanson with only 3 or sometimes 2 (gasp!) 4:00 games.  What kind of garbage is this?  There should be at least 4 games at 4:00 every Sunday.  4 is the minimum number of games needed, in my mind, to ensure that there is always something of some interest taking place in at least one game.  With 2 or 3 games, there is too great a chance of all games being in commercials or at halftime at the same time.  While Scott Hanson does a great job with that filler time, it is an inefficient use of his wonderful talent.  Even on a 6-bye, London-morning NFL Sunday, there are 9 Sunday-afternoon games.  That should break down as 5 games at 1:00 and 4 games at 4:00.  If we can achieve this 4-game minimum with 9 afternoon games, we can certainly achieve it during other weeks that have between 10 and 15 Sunday-afternoon games.  This past Sunday, we had 8 games at 1:00 and only 3 at 4:00.     Not on my watch!

You are welcome, America.  I just made sports better in six different ways.

* Yes, I started a sentence with two Cher songs.  Yes, I am aware of it. Yes, I am very proud of it.

One thought on “Six Ways I Can Improve Sports”