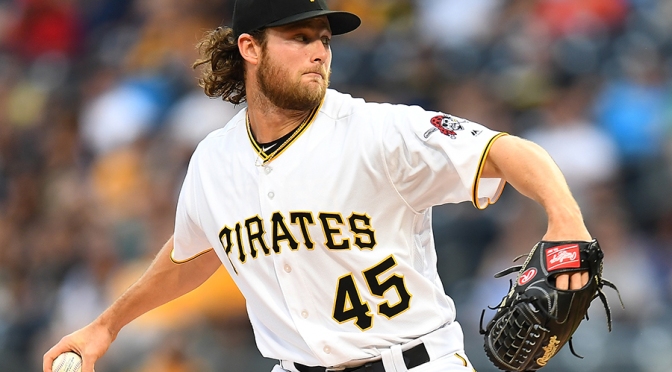 Oh my, what a team this could be. – Clint Frazier would likely be involved in the deal. – #Yankees #NYY

I don’t mean to brag, but I predicted this. In my coaches office, my friend and I were discussing the Yankees next steps, and realized Gerrit Cole was on the trade block. However, we did argue which outfield pieces would be best to trade away for Cole.

With an abundance of outfield talent, the Yankees have to get rid of somebody this offseason. Ideally, it is Jacoby Ellsbury, but he has a no-trade clause that he does not want to use. Plus, nobody really wants him due to his massive contract and sub-par play…not a great combo.

In second place is Aaron Hicks. He is one of the better defensive center fielders in the game with a rocket of an arm.

He is also coming off the best season of his career. His intake will never be higher, so sell on him now.

Brett Gardner is a leader in the clubhouse, and he was an essential part in the Yankees’ success in 2017. In my opinion, these young hitters still need guidance, and a familiar role model to shadow their at-bats over the next few years will help them tremendously. Gardner is that dude, and needs to remain at the top of the lineup at all costs.

Lastly, Clint Frazier is a potential superstar, and we all saw what he was capable of during the summer.

He was always thought to be the future of left field in New York ever since he was the centerpiece of the Andrew Miller deal. But now, we have Aaron Judge and Giancarlo Stanton manning the corner spots for the next ten years.  He is also the most appealing asset out of the Yankee outfielders the Pirates could receive in this deal. So my question is, do we need Frazier?

My answer is yes, but it is also no. Is our window for a championship now? Yes. Is our window also in five or six years from now? Yes. That seems to be the dilemma. Do the Yankees want to solidify their offense for the next decade, or do they want to fix their one problem remaining and be the favorite World Series contender right now. Are we still rebuilding, or are we officially rebuilt? I’d argue our work is done, and it is time to focus on the now.

Sending Red Thunder to Pittsburgh for an ace-caliber pitcher is something that is mouth-watering to think about.

Frazier will not reach his max potential for another 3-4 years, and frankly, the Yankees window for a title is open now. Who knows if we will have the same bullpen in four years, or if Sonny Gray will stick around.  Will we be able to resign all these young, budding superstars?

Brett Gardner is the third outfielder right now, he has earned that. Clint is going to be stuck in Triple-A, or be the 5th man up after Hicks. It really hurts trading away somebody with so much talent and “legendary bat speed”, but that’s the price of becoming a complete team.

In my opinion, acquiring Gerrit Cole now makes them by far the most complete team in baseball. Here’s a look at the rotation (assuming C.C. Sabathia is signed and this trade is made):

Having six capable starters is a luxury, for multiple reasons:

These are luxuries indeed, but this depth is something that is required for a championship team. The last weakness the Yankees find is the rotation, but with the addition of Gerrit Cole and the probable signing of C.C., it could quickly become a strength. The only downside…is parting with Clint Frazier and his wealth of potential. I think that is worth a ring.