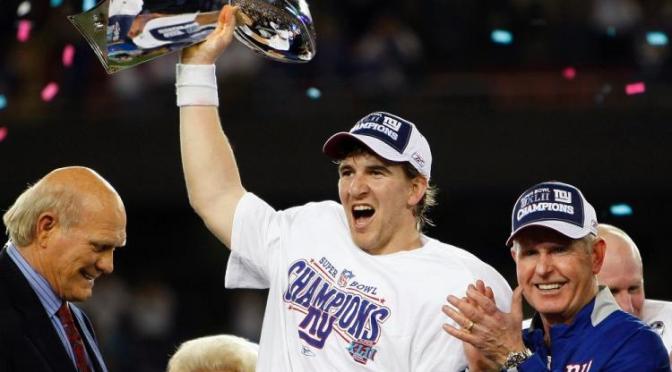 Obviously, the news that the Giants will be starting Geno Smith in place of long-time starter and 2-time Super Bowl MVP Eli Manning took the sports world by storm yesterday. I’m utterly stunned by this move. Don’t get me wrong, I’ve been actively rooting against the Giants in every game for the last few weeks because there’s nothing worse in the NFL than being mediocre. What’s the point in going 6-10 when you can go 3-13 and potentially draft a franchise-changing player, aka Saquon Barkley? But while I’m all in on the tank, not at this cost. Not if it means disrespecting the best quarterback in franchise history, and a guy who gave us Giants fans the most unforgettable Super Bowl runs we could ask for. I mean, look at this guy.

Just sickening to not let him go out there and do his job. He’s currently working with one of the worst offensive lines in the league and a group of receivers where what was supposed to be his 4th/5th target in Roger Lewis is now his number one, and he’s still going out there week after week trying to win games. Don’t get me wrong, Eli is no Derek Jeter in terms of his consistency or his New York sports legacy. Yeah, the Giants haven’t exactly been a perennial playoff team and he’s more than capable of throwing an untimely interception. But you could always count on Eli to get up from every brutal hit he took, and give the G-Men a chance to win every damn week. And we bench him for this?

This is the quarterback Ben McAdoo is benching Eli Manning for. pic.twitter.com/iTnfnoQk0o

I mean I guess they wanna ensure the tank, but this is crazy. Also, props to Eli for not taking the pity “start” just to keep his streak alive. Shows you that the guy is way more concerned with the team’s performance than personal records. Just LOOK at this stat.

Every NFL team has utilized at least 3 different starting QB since Eli Manning's first NFL start in Week 11 of 2004.

Every team in the NFC East has used at least 10.

The Browns have utilized 24 starting QBs in that time.

What a weird season and what a weird way to go about it. Fire McAdoo, fire Reese, fire freaking everyone. Eli Manning will always be my quarterback, and there’s no two ways about it.