When I joined the esteem staff of “Below the Belt Sports”, the question was not, “Would my first hockey post be about my hatred for the NHL’s overtime and point system?”  The question was, “When would I write that post?”  After watching the Devils blow a 2-goal lead in the last two minutes and then seeing the team and fans act like everything was great after “winning” the shootout, I realized that the answer to the second question needed to be “Right Now”.

Let’s start though with the good in today’s NHL.  I believe that the NHL is a more exciting game than it was 10 years ago.  I am not basing this off stats.  This is purely from the eye test.  My eye test.  Compared to 10 years ago, the NHL currently has more speed, more stars, and more quality scoring chances.  In the media-crazed world in which we live, small-market teams are more marketable than they once were.  The excitement of the Nashville Predators’ run to the Finals is proof of that.  Additionally, as much as I have complained about the league putting teams in “non-hockey” markets over the years, the truth is that the Florida Panthers and Arizona Coyotes are the only two teams that have never really become big draws in their home regions.  (The jury is still out on Vegas, but I think that one will work out just fine.)

Furthermore, to many people, the NBA and NFL are worse than they were 10 years ago, and this helps the relative appeal of the NHL.  Everyone knows the ratings are down in the NFL this year, and I am not going to belabor the possible reasons.  We all know the theories.  As for the NBA, I realize the Association is quite popular these days, but it is popular because of the soap-opera stuff.  We are roughly a month into the NBA’s preseason, and the preseason will end in mid-May.  Nothing that happens between now and mid-May matters unless it is a major injury to a major player on a major team (see “Hayward, Gordon”).   24 of the NBA teams have roughly no chance to win the championship, and there’s at least a 90% chance that either Cleveland or Golden State will win it.  Again, I know the NBA is popular.  People still tune in to see great dunks, great shots, great passes, and great Tweets.  The last item there is keeping espn.com afloat.  I swear that, every time I go to espn.com (wait, why do I ever go there?), half of the headlines are about tweets or comments made by Lebron, Durant, Curry, or Westbrook.

If you like that stuff, you like the NBA.  However, if you like seeing great competition night in and night out, if you like knowing that everyone in the league has a chance at the playoffs as of the start of the season, if you like games with fast action and few stoppages, and if you like a sport where at least half the league has a legitimate chance at a title; you are watching the NHL over the NBA.  Also, every second of a hockey game is riveting because there are 5 goals scored per game on average.  Therefore, a goal in the first few minutes could be the game-winning goal.  In the NBA, you can wait until the third or fourth quarter to tune in, because no point scored in the first half is that significant.

Anyway, the NHL should be the perfect game, and it is…for 60 minutes.  Then, overtime and the shootout come along, and it is a disaster.  From 1999 through 2015, overtime was 4-on-4, and I had no problem with it.  I actually loved it.  It was still real hockey.  After all, we are used to seeing 4-on-4 whenever there are matching minors or overlapping penalties.  By taking two players off the ice, 4-on-4 overtime served the NHL’s objectives of making overtime faster, more exciting, and more likely to produce a goal. 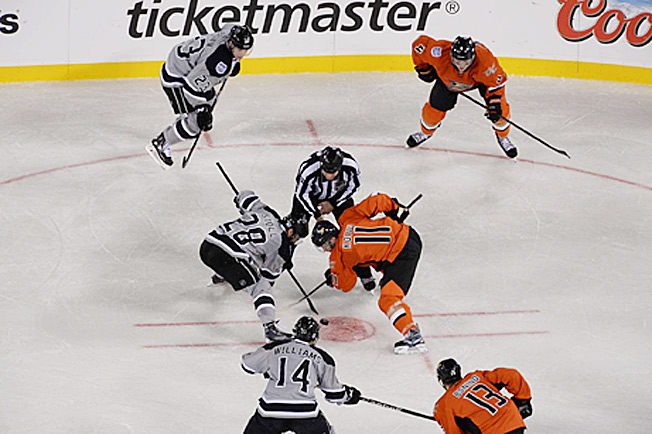 Unfortunately, after the full-season lockout of 2004-5, the NHL felt it needed to make some major changes to win back fans.  While two of the rule changes were excellent (allowing two-line passes and preventing line changes when a team ices the puck), two of them have angered me and continue to anger me.  One of those is the trapezoid (“The Martin Brodeur Rule”).   Meanwhile, the one that most angers me is the shootout.  As of 2005, after overtime, games do not end in ties.  Instead, they go to shootouts.  Therefore, a great team hockey game is decided by an individual-skills competition.  For you non-hockey fans, this is akin to deciding baseball games by home-run derbies or basketball games by 3-point-shooting contests.  It just doesn’t feel right.  When the game is on the line, you should not change the game to a completely different game.

Therefore, from 2005 through 2015, I thought that the shootout was the worst thing that could ever happen to hockey.  I was wrong.  In 2015, the league changed overtime to 3-on-3.  Now, instead of having one gimmick end a game, there are two of them back-to-back!   3-on-3 hockey is not hockey.  While 4-on-4 maintains standard hockey strategy, 3-on-3 is just a bunch of basketball-like possessions.  One player can skate circles with the puck while waiting for his linemates to change.  There are a bunch of “offensive rushes”, but, since a 3-on-2 is considered a “rush”, the overtime is one never-ending set of rushes.  Therefore, the excitement of a rush is gone.  Plus, with so few skaters on the ice, it sometimes feels like ping pong as teams trade chance for chance.  It does not take that much skill to get an overtime chance.  There are six skaters on the ice; the puck is going to find you if you are out there.  Why do you think John Moore has so many points in overtime and so few in regulation?

Furthermore, the league, in its infinite wisdom, has decided this year to have teams change sides for overtime so that it is a longer distance to complete a line change.  This means that players get more tired as they wait for an appropriate time to change, and it is more likely that people will deliberately skate the puck out of the opposing zone to allow his linemates to change.  I saw Erik Karlsson, one of the top NHL players, do it two or three times alone last night.  It’s a joke.  It’s not hockey.

At last night’s Devils game, there was a thrilling finish to regulation.  I was angry because the Devils had blown a 2-goal lead, but it was real hockey.  As soon as overtime began, my hockey gut realized, “Wait, if the Devils score a goal in this ping-pong tournament, then that erases the 2-goal lead they just blew?  That doesn’t seem right.”  I have never felt like shootout wins were real wins, and I do not feel like 3-on-3 wins are real wins either.  Therefore, something has to give.

I realize that this crap is here to stay.  I know that sports are a business, and, if 3-on-3 and shootouts are good for ratings, they are going to stick around.  However, if these gimmicks are going to stick around, the NHL needs to change its point system.  I am a huge Devils fan, but I feel guilty getting 2 points from a skills-competition win in which the team blew a 2-goal lead.  Likewise, I get angry when their rivals earn two points for the same reason. For those of you who do not know; when the league went to 4-on-4 overtime in 1999, the league created the “loser point”.  This rule means that teams earn 2 points for any win, 1 loss for an overtime or shootout loss, and 0 points for a regulation loss.  The rule has stayed as the NHL introduced shootouts and then changed 4-on-4 overtime to 3-on-3.

Therefore, the league correctly acknowledges that a loss is less “real” when it happens during a gimmick – 3-on-3 or shootout.  Given that, why the heck does the league not acknowledge that a win is less “real” when it happens during a gimmick contest?  I am not the first to suggest the easy fix to this problem, but here it goes anyway.  A team should get 3 points for a regulation win, 2 points for an overtime/shootout win, 1 point for an overtime/shootout loss, and 0 points for a regulation loss.  This way, each game is worth the same number of points; a gimmick win is appropriately valued; and you eliminate the ridiculous practice of rooting against games in your conference to go to overtime.  Seriously, how dumb is it that any NHL fan who knows math has to root specifically against games going to overtime?  It makes sense though.  Do you want your competitors earning a total of 2 points in a game or a total of 3 points?  The 3-2-1-0 system gets rid of this problem.  Every game is worth 3 points – either 3 go to one team, or 2 go to one team while 1 goes to the other.

Lastly, I hope nobody is concerned about what this change in points would do to the record book.  As it is, if you compare point totals now to point totals in 1999 and earlier (when overtime was 5-on-5; there was no loser point; and there were still ties), you are wasting your time.  The point totals now are already noticeably inflated from those days.  Who cares if we inflate them again?

Anyway, that’s enough for today.  The NHL is in a great place right now, but it needs to fix its point system.