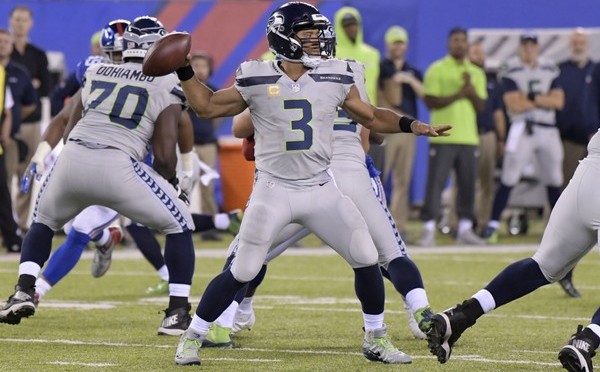 Russell Wilson and Co. are quite familiar with the confines of MetLife Stadium. Why? Let me humbly remind you:

The greatest day of my life. Seahawks won Super Bowl XLVIII (48 for my non-bilingual readers) at MetLife in 2014. On Sunday, they returned to the Meadowlands for the first time since their pouncing of the Broncos and made the NY Football Giants look just as bad as the San Francisco Giants in 2017, winning 24-7.

The first half went as many Seattle Seahawks football games go…poor offense, great defense, dumb penalties, and losing going into the second half. The receivers were at fault multiple times with big drops by Jimmy Graham and a bad one by Rawls on a screen pass. Play-calling around the endzone was pretty horrid too, as we had about 1200 attempts in the redzone and came away with zero points.

The Giants only score came off a Thomas Rawls fumble and a quick score on a play-action pass from Eli Manning to Evan Engram.

Engram actually looked like the best player on the field for the Giants offensively, and showed flashes of why he was picked in the first round in this years draft. Other than that, there were no positives for this Giants offense. Eli had to check down multiple times in the fourth quarter, and it seemed like the only big play they really had a chance on was a deep ball in the first quarter that Richard Sherman made a great play on to bat away.

On the winning side, the Seahawks offense looked methodical in the first half, but broke out in the second half (as per usual) with great passing and a few mixed in running plays. Watching these games, I always hear the announcers compare this Seahawks team to the teams of the past, where the running game behind Marshawn Lynch was everything. This has to stop because clearly running the ball is no longer our strong suit, but keeping it as a change of pace with multiple different backs has really worked to our advantage. We know what each running back is going to give us, but the Seahawks like to keep opposing defenses on their toes as to who will be in on the next snap. Their running game has gone from chaos to organized chaos, and it seems like Pete Carroll finally has a handle on what he wants to do with Lacy, Rawls, McKissic, and Prosise (when healthy). This is a great sign moving forward, maybe not for the individual success of each back, but for the team as a whole.

Russell Wilson was good, not great. His stats were stellar, but I expect better. He missed Baldwin on a bomb down the field that would have been an easy touchdown, and he didn’t make enough good throws in the endzone with a poorly thrown ball to Graham and a rocket to Lockett (lol) that did not have to be as hard as it was. He, like the Seahawks, figured things out in the second half.

We had a small blast from the past when Paul Richarson came down with a “Fail Mary” looking catch on Giants safety Landon Collins.

The rule is that when an offensive and defensive player have joint possession of the ball on the ground, the catch is rewarded to the offensive player. I saw some people argue that it should have been an incomplete pass, but that is just stupid. The ball was in somebody’s hands on the ground, so one of them had to have caught it. Crazy rule, but these are once every few years type plays…both just happened to happen to the Seahawks.

He also floated a touch pass to Baldwin for the lead midway through the third quarter.

I was really excited that the Wilson-Baldwin connection was back in dominant form. In order for the passing game to be effective, Baldwin needs to be incorporated. Even when he doesn’t have big statistical games, he is a game-changer. He moves the chains so often that when Wilson can’t find him, the offense stalls. To be the elite team Seattle can be, their bromance on the field needs to continue.

The defense looked great, even though that isn’t saying much with the battered down Giants team.  They will be tested next week at home against the red-hot Texans and Deshaun Watson. We will get our starting cornerback back Jeremy Lane and allow Shaquill Griffin, who has played above expectations in his absence, to slide back into nickel coverage. Healthy and looking like an elite team once again, the Seahawks are back at Century Link Field in Week 8, let’s get a dub.