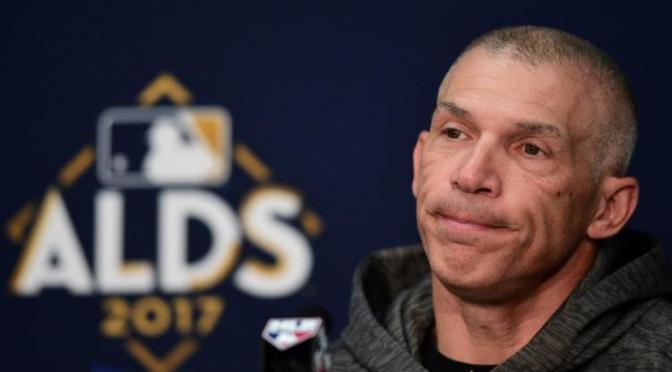 I’ve seen the Yankees lose in the playoffs plenty of times before but last night is just a tough, tough pill to swallow. Ever since it became clear that the Yankees were playing the Indians and that likely AL Cy Young winner Corey Kluber would be starting Game 2, everyone talked about how important Game 1 was. Instead, Trevor Bauer looked like the Cy Young caliber pitcher, and the Yankees were dominated.

For some reason, all day Friday I said I had a good feeling about Game 2 and our chances of getting to Kluber. I think I was just trying to convince myself of it so I’d feel better, but nonetheless I felt like we were gonna get some runs off of him. Gary Sanchez confirmed my belief with his homer in the top of the first.

What I could not have anticipated, however, was the Bombers touching up Kluber for SIX runs in less than three innings. An Aaron Hicks 3-run shot had us Yankee fans dreaming of the series coming back to the Bronx tied at 1, and Greg Bird’s shot seemed to put the game out of reach.

Everything appeared to be going to plan. CC worked into and out of trouble multiple times in a gutsy five-plus inning performance before Joe Girardi turned the ball over to our dominant bullpen. As much as I hate Girardi right now, I’m not gonna come after him for this move. Sure CC was pitching great with a low pitch count, but he pushed all the right buttons when it came to the bullpen in the Wild Card game, and Chad Green has been money all year. But his next crucial decision is the reason I am calling for him to be fired, as well as thrown in jail.

I’m not gonna put in the replay of what happened next because I can’t bring myself to watch it again. With two outs, two strikes, and two runners on, Green throws a pitch that hits the knob of Lonnie Chisenhall’s bat and lands in Gary Sanchez’s glove. End of the inning, right? Wrong. The home plate umpire said the pitch hit Chisenhall. Sanchez was immediately adamant that the ball hit the bat and not Chisenhall. So Girardi, as a former catcher, puts his faith in Sanchez because he had the clearest view, right?

SPOILER ALERT: THIS IS NOT WHAT JOE DID.

Girardi decided that because the Yankees’ replay crew didn’t have enough time to see the super slow-mo before he had to make a decision on challenging, he was going to hold off and let the play stand.

Let’s understand what that means.

Girardi would rather take his chances and pitch to Francisco Lindor, the Indians best hitter/one of the best hitters in the American League, with the bases loaded than take a chance and potentially lose (because to be fair he couldn’t be 100% sure at that point) a challenge. How how how HOW is this a thought in his mind? And the fact that he tried to defend the move with the absolutely BULLSHIT excuse that he didn’t want to throw off Green’s “rhythm” with a challenge? I know he finally took the blame today but how long was it going to take this guy to hold himself accountable for the biggest managing blunder of his career?

You could also make the case that he left both Robertson and Betances in the game for too long, but I don’t even care about those moves. I could sit here and complain about bullpen usage for hours, but that’s one of the hardest tasks a manager has. But when you are faced with a situation where a challenge can get you out of an inning and the alternative is pitching to the other team’s best hitter with the bases loaded, challenging is probably a good idea.

I’ve never really been a big Girardi fan. I thought that the team overachieving this year meant he would be back for sure, but after last night I’m thinking differently. How are players supposed to get behind a guy who not only shoots his team in the foot in its most crucial game all season, but refuses to take responsibility for it after the fact? This Yankee team has the young core to compete and make runs deep into the playoffs for years to come. The Yankees’ front office needs to ask themselves: is Joe Girardi the guy to lead them there? Sure, he already won a World Series in 2009, but that was a team full of veterans. The present day Yankees are one of the youngest teams in baseball; is Joe Girardi the fearless leader they need to guide them through the playoffs? After last night, I think the clear answer is no.

Game 3 in the Bronx tomorrow night, I’ll be in attendance. I really wish I could’ve seen how crazy the stadium would be if the series was tied at 1, but it should still be rocking regardless. A 2-0 deficit is a tough hole to get out of but as the late Yogi Berra used to say, it ain’t over til’ it’s over. There’s also this El Gary tweet from earlier today.

"Every great story happened when someone decided not to give up."

After the ’04 ALCS, I’m definitely a believer in the fact that anything can happen in the game of baseball. The Yankees are home, Tanaka is on the hill, and there will be playoff baseball in the Bronx. If the Yankees proved one thing last night, it’s that the Indians are not unbeatable, that’s for damn sure. Let’s right this ship and force Game 4. Thumbs down for days.