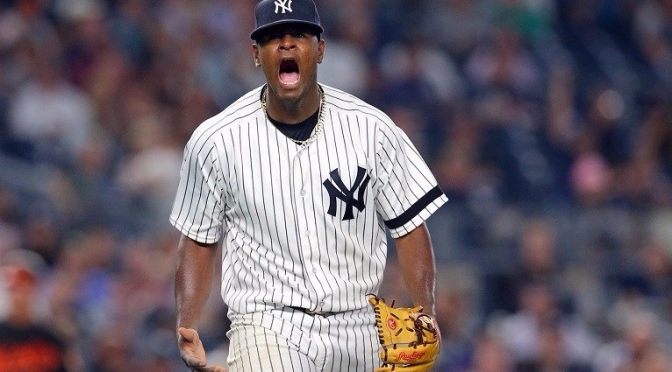 So the AL Wild Card Game is tomorrow night at 8:00, with the Yankees taking on the Minnesota Twins at the stadium. It’s a battle of aces, as Luis Severino will face Ervin Santana. I’m really excited to watch and see what happens, because who doesn’t love playoff baseball? It’s also the first ever elimination game in the young careers of budding stars like Severino, Aaron Judge, and Gary Sanchez (Sanchez was on the roster for the 2015 Wild Card game but did not play.) All good things, right? Not exactly.

When you’re as big of a fan of a team as I am of the Yankees, you don’t just get excited for big games. You get nervous. The fact that tomorrow night could be the last game the 2017 Yankees play has made me sick to my stomach all day. Does that make me a huge loser who cares too much about some baseball game? That’s your own opinion. But the Yankees are much more than just some team to me. The Yankees personify my childhood. They represent trips I made to Yankee Stadium with my family from the time I was 3. They represent summer days playing stickball with my friends when we tried to replicate all the players’ batting stances and swings (Gary Sheffield was always a favorite.) They even represent the days when your MLB 2K6 franchise on PS2 weighed on your mind more than any schoolwork or girl ever could. (Disclaimer: I still don’t talk to girls.) You get my point.

So yeah, I’m a big sports guy in general. But the Yankees are my team. My love of Fantasy Football is sometimes more important to me than the Giants. I haven’t followed hockey as closely as I would like to in years. And don’t get me started on Rutgers or the Knicks. But Yankees baseball will always be extremely important to me.

If you’re a big enough fan of a team, you know how I feel. You’ll know the feeling of me being on the edge of my seat for every pitch, with my emotions being a mix of excitement and angst. You’ll know the feeling of relief and enjoyment that comes with a win in an elimination game, and the heartbreak of seeing your season end so suddenly. As nervous as I am for tomorrow night, this is the best scenario we could ask for in a game like this. The Yankees are home, have been swinging the bats well, and have their ace on the hill. If the Twins beat us, even with everything I just said going against them, then you just have to tip your caps to them. But I’d be absolutely heartbroken to see this team get eliminated without even playing a full series.

This 2017 season has been a hell of a ride. When you watch a team for 6 months and a good portion of 162 games, you feel like you get to know them, even if you don’t know them personally. This season was more than I ever expected, and more than us Yankee fans could have asked for. The future is extremely bright in the Bronx. That being said, I think I speak for all Yankee fans when I say that I am not ready to see this season end tomorrow night. Sevy on the hill, home crowd in the seats, win or go home. Playoff baseball in the Bronx baby, let’s go Yankees!