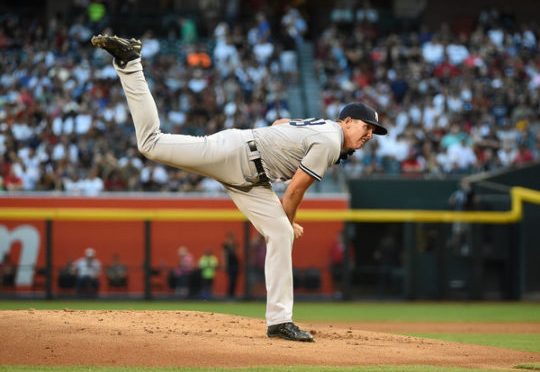 More often than not a pitcher will get every chance possible to be a starter when attempting to make the major leagues. You don’t have to look much farther than Mariano Rivera, the greatest closer who ever lived, who started for his first full year in the majors. Archie Bradley, once the Diamondbacks top pitching prospect was moved to the bullpen and has been one of the most dominant relievers in 2017. Teams simply place more of an emphasis and importance on starting pitchers. Spring training usually starts with a couple minor league pitchers vying for one or two of the remaining spots in the rotation or else their banished to the bullpen or worse…the minors. Chad Green was no different.

After the trade that sent him and Luis Cessa to the Yankees in exchange for Justin Wilson (now with the Cubs due to the Tigers roster full of Crypt Keepers), the 26 year old Green flashed some promise as a rotation fill in at the end of the 2016 season. There were warning signs of inconsistency that hinted he may never be more than a serviceable fifth man or even rotation insurance down in Triple-A, he got only one start this year for the Yankees and lasted just 2.1 innings. For those of you that don’t know, generally you want your starting pitcher to last a little longer than an out into the third inning otherwise you’re bullpen will be decimated for the next day. It seemed like Green’s major league career was destined to be that of the low leverage variety, maybe as the second long reliever in the bullpen thanks to the sheer dominance of Adam Warren this year (another starter converted to the bullpen).

The move to the bullpen has been eye opening. Since the All-Star break, Green has the highest strikeout percentage of any reliever in the major leagues at a video game like 49.2% (32-65 batters). That’s better than Kenley Jansen, Andrew Miller, Craig Kimbrel and even better than his teammates Dellin Betances and 86 million dollar man Aroldis Chapman. Let that sink in for a minute. I’ve just listed some of the best relief pitchers in the game today and Green has been absolutely blowing them away in the second half of the year. He leads all rookie relievers in WAR and is a huge part of the dominance the Yankee bullpen has shown since the All-Star break.

Even before this ridiculous run of dominance, Green was showing signs of figuring things out. Allow me to transport you back to a dark time where almost every seventh inning the Yankees were trotting out Tyler Clippard. Tyler Clippard was the closer for a minor league team pretending to be in the majors (Chicago White Sox), due to tendency to give up the longest home runs anybody this side of the Mississippi has ever seen. He also had a really weird and heartbreaking propensity for giving up grand slams…not something you want to be remembered for. He was mercifully moved back into the playoff hunt in a trade that sent him over the first place Astros, which seems too good a fate for somebody so bad. During that time more and more people wanted to give the seventh to Adam Warren who was having his best season ever, I and a certain few thought that Chad Green could do the job just as well. As it turns out, he could probably do the job even better.

Green’s effectiveness lies in the continued development of his slider and an apparently rising fastball that touches 98 mph on the gun. More on the slider in a bit, the fastball is what is extremely telling about Green’s run. The fastball has little movement but it has such late life up in the zone that even his catcher has no idea what’s going on with the pitch, “I don’t know what’s going on with his fastball, but nobody can hit it” Sanchez said after Green worked 2 2/3rd scoreless with 4 strikeouts. When even your catcher has no idea what’s going on with a pitch, think of what the batters must be going through. Green might as well be throwing whiffle balls up there with the movement he gets on his heater.

Here’s a live look at Green throwing his fastball to batters stupid enough to face it.

His slider is no joke either, with the horizontal and vertical movement on the pitch increasing as the season goes on hitters stand less and less of a chance of squaring it up. The slider has always been his out pitch but being able to work down in the zone with his breaking ball sets up that mystifying fastball hitters have been whiffing at all season long.

He’s able to work multiple innings, which he generally does every time he pitches, and he’s a great clubhouse guy. Most pitchers who begin as starters tend to want to stay starters, unfortunately sometimes their stuff doesn’t play up as well multiple times through a lineup. Green has taken his move into the bullpen in stride and has even approached Warren as a mentor seeing as they are both converted relievers. I seem to remember David Robertson soaking up everything like a sponge in his time with Rivera and Green appears to be no different with the wealth of knowledge he has at his disposal in the loaded Yankee bullpen. With plenty of people to help in his development and the ability to go multiple innings the future for Green in the bullpen is extremely bright. He part of the reason the Yankees have one of the best bullpens in baseball because even if the suspect rotation can’t give much more than 5 innings, Green is ready to swoop in and rack up the Ks. He’ll be extremely important come playoff time, assuming the Yanks are able to either compete for the top spot in the East or hang onto their wildcard spot. At 26 this could be the start of years of dominance, but with relievers being such a volatile group it’s definitely best to temper expectations. It’s just hard not to get excited with this kind of rapid development.