On this day in 1997, 'Air Bud' was released pic.twitter.com/rc21uFgqGB

Over 20 years of greatness. Sport after sport, Air Bud, aka Buddy, DOMINATED middle and high school athletes, putting their college athletic dreams on hold as he made them look silly with every new movie, all while being the most lovable dog imaginable. He was truly a dog like no other…or was he?

Call me crazy, but this movie came out in 1997. You know what else was happening in the late 90s? You guessed it. The Steroid Era. Sammy Sosa, Mark McGwire, Jose Canseco, Barry Bonds, and the whole rest of the Juice Squad were sticking needles in every part of their body and hitting nukes (sorry) all over the baseball diamond. It was an iconic time in baseball.

Too good to be true? (also please watch this video, the fact that somebody actually took the time to make this is hilarious on its own)

Now I’m not accusing Buddy of juicing up, but I’m simply speculating at his consistent dominance over multiple sports at such a tainted time in sports.  Kind of hard to sustain organically, don’t you think? Let’s take a deeper look.

Air Bud was a blockbuster film, making $25 million over budget right out of the gate in 1997.  He was a doggy icon. And with great power comes great responsibility, and maybe something a young pup like himself could’t handle.  Maybe the pressure got to him, similar to A-Rod.  He didn’t start his career on roids, but maybe he felt the need to use them after the big contract.  He cracked under the fame when he knew he’d have to keep performing to maintain the spotlight.

But, Air Bud: Golden Receiver came out in 1998, and this dog ran all over the field, catching balls in his mouth like…nevermind, and running routes that would put Randy Moss and Jerry Rice to shame.  How did he transform from a basketball star to football powerhouse so quickly? Maybe raw athleticism…maybe not.

As the years carried on, Buddy conquered other sports effortlessly, including baseball and soccer.  And it all just seems a little too suspicious to me.

Eventually, he decided to walk away from the games, unscathed like Jeter after having his clean prime in a tainted time. Buddy went on to have kids…that can talk??? 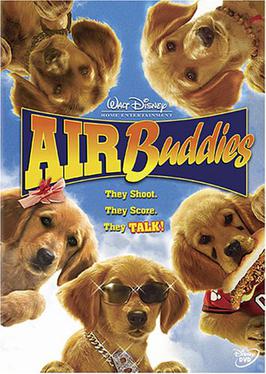 Seems a little mutant-like to me. And maybe it’s the movie magic, or maybe the stuff he juiced with had a little extra something-something in it.  I could be pulling at strings here, but Buddy played in a asterisk-ridden time, and all I’m saying is let’s not leave his name entirely off the Mitchell Report just yet.

Air Bud is certainly in the Hall of Fame of dogs, alongside Lassie, Shadow and Chance from Homeward Bound, Beethoven, Old Yeller (RIP), and many more. But, when speculation arises, the reputation demises (put that on the back of a minivan and smoke it).  We’re onto you, Air Bud.

P.S.: If you take this seriously maybe you should use steroids on your brain.