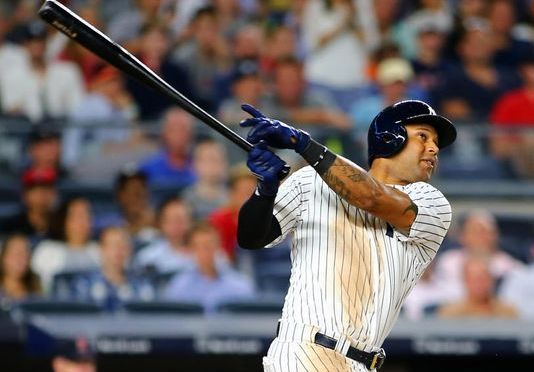 Let’s get one thing out of the way: I’m done with Aroldis Chapman. That’s now two blown saves against the Red Sox this year, and almost another on Friday night. That’s inexcusable. He can’t close important games anymore, let David Robertson do that. I don’t care what Chapman makes, he crumbles under pressure. While Didi Gregorious has made the transition from the Jeter era seamless, Chapman constantly reminds Yankee fans that there will never be another Mariano Rivera.

It sucks that they didn’t take 2 out of 3. But the way I see it, we stole one from them and they returned the favor last night. Friday night was the best win of the year. When you turn a 4-run lead over in the eighth to your newly acquired setup man, you probably expect to win that game. But the Yankee bats finally came to life, and some heroics by Aaron Hicks, Didi Gregorious and Todd Frazier helped the Yankees to a 5-4 win, sealed by an awesome 7-5 double play in which Hicks’ throw got Eduardo Nunez trying to tag from 2nd to 3rd.

Saturday was not as fun, as a 1st inning Gary Sanchez homer was quickly erased as Luis Severino had probably his worst outing all year, giving up 8 runs including two 3-run shots to Andrew Benintendi. With Chris Sale on the mound Sunday night, the Sox seemed destined to take 2 of 3. But Yanks rookie Jordan Montgomery was dealing as well, giving up just one run over 5 and a third innings pitched. An Austin Romine triple that maybe, possibly, probably, definitely should have been caught by Mookie Betts tied the game at one in the fifth and brought life to Yankee Stadium. A Todd Frazier sac fly in the 8th gave the Yanks a 2-1 lead, and you know what happened after that.

To summarize,  it hurts not taking 2/3, but when your closer blows one/almost two saves and your ace gets shelled, it could’ve been worse.

Now on to our good pals, the Mets. They’ve been selling off starters in a fire sale the last few weeks, including Lucas Duda, Jay Bruce, Neil Walker, and Addison Reed (thanks for that last one). If the Yankees don’t at least 3 of 4 from a team that’s basically been holding up the white flag for weeks now, it’s a problem. Granted, players always rise to the occasion in the Subway Series regardless of where their team is in the standings, but the Yankees need to take this series.

I’ll be at the first game tonight with fellow Founding Fathers Bert and Dave. We get to see a pitching matchup for the ages, with the Yanks ace Luis Cessa (0-3, 4.83 ERA), taking on NL Cy Young favorite Rafael Montero (0-4, 6.48 ERA since start of July). Tuesday will be an actual pitchers’ duel, with Sonny Gray looking for his first win in Pinstripes against Jacob deGrom. Jaime Garcia vs. Seth Lugo will go on Wednesday, with Luis Severino against Steven Matz to close the series Thursday.

So the Yanks will face two solid starters this series in deGrom and Matz, but will counter with their two best guys, Gray and Severino. Hopefully, Judge can break out of his slump and hit a homer or two this series. And maybe they can finally get Sonny Gray some run support. Four games against a team that has essentially given up on the season should be a godsend to the Yankees. But the Subway Series is a whole different animal. If the Yanks can take 3 of 4, it would give them some much needed momentum before heading to Fenway for three more against the Red Sox this weekend. With any luck, Aroldis Chapman will be locked in a closet somewhere in the Red Sox’ visitors locker room for those games. Go Yankees, baby.