Another Sunday without football has come and gone, and our withdrawals can finally be tamed by the beginning of fantasy football season.  With the first preseason game under our belt, it’s time to really get serious about draft strategies.  So without further ado, the second draft strategy I will be presenting is The Balancing Act.

With this, the main focus is the get an elite player at each position.  You ensure production from all aspects of your lineup and you’ll never be a weak team (barring injury or a repeat Todd Gurley).  The problem with this approach is you’re likely to have a pretty top heavy team.  You’re #1/2 guys will be good, but since you want talent at each position, it’s possible you fall-off at multiple spots.  Relying on your sleeper intelligence and waiver wire know-how is key with this.

I, again, took the 6th overall pick as the worst. Here’s the team:

Arguably the best receiver in the NFL, and with this elite Giants offense and a playoff season on the horizon, Odell could reach a new level this year.  I am glad to scoop him at the 6th pick, and my balancing act has just begun.

I am not entirely confident with this pick, but I won’t trust Fournette, and I don’t want to stack great receiver like pancakes. Murray had a great year last year, so as my #1 back, I’ll believe the hype.
3. Aaron Rodgers (GB – QB)

Tom Brady is 1, and Rodgers is 1A. If you can’t get either of these, snag a good running back or Gronk. 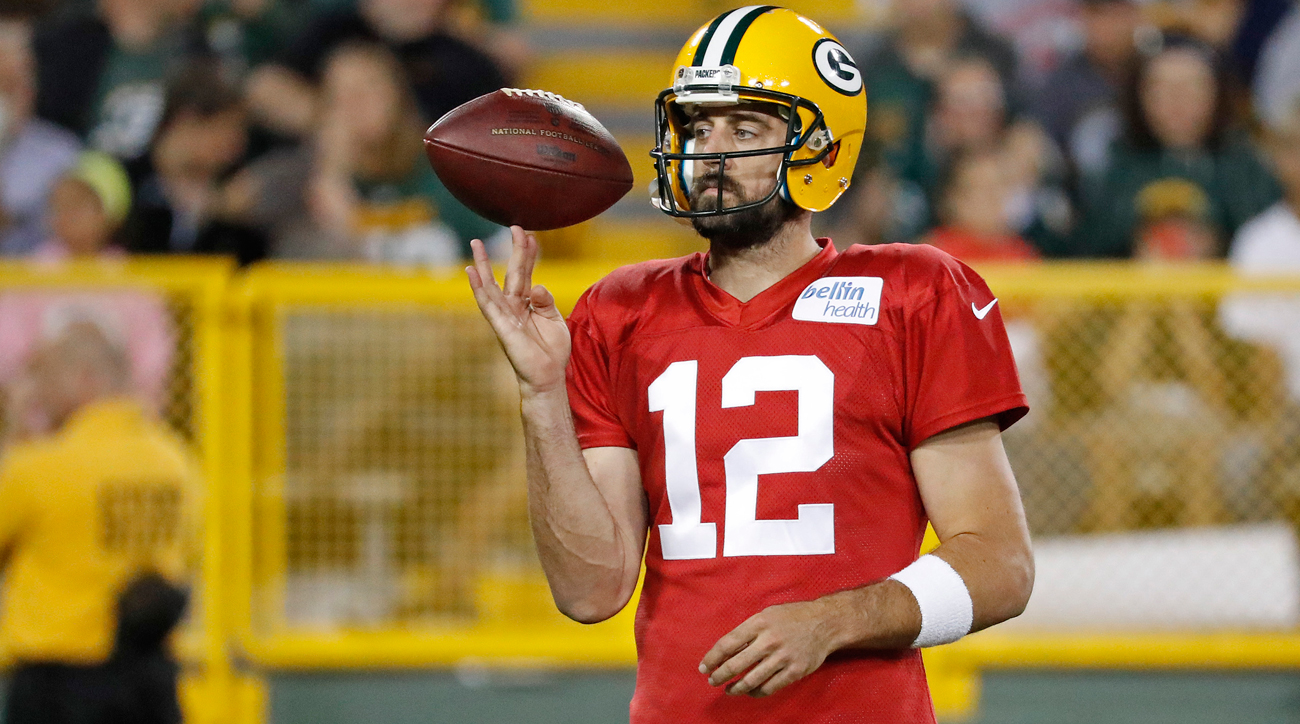 “I know Ima get got, but Ima get mine more than I get got doe”-Marshawn Lynch. Trust me, his football abilities are better than his English, and despite his year off, don’t count Lynch out just yet. Considering I got my guy in Rodgers, I needed to build the RB game due to their overall low depth at the position.

I was a pick away from Jordan Reed, who I would prefer even with the injury, but there are certainly some times when Graham returns to New Orleans form in Seattle.  A low-end TE1, but the best available at the time.
6. Jarvis Landry (Mia – WR)

Potential to be a WR1, but this pick was done when Tannehill was still QB in Miami. With Cutler calling the shots, I have no idea what will happen. If I was doing this pick right now, I would not take any Dolphins receiver.
7. Golden Tate (Det – WR)

Stafford is a great quarterback, and Golden Tate is the best receiver on the team. If he doesn’t get over 1,000 yards I’d be surprised.

Do not trust a Seattle running back this year as more than a flex option.  Eddie Lacy is the “starter” right now, but Pete Carroll and Co. are an unusual bunch, so don’t expect much consistency.
9. Adrian Peterson (NO – RB)

Another old veteran running back this year that is hard to trust. You’re drafting him believing he returns close to form, but as the 4th back he’s not a bad option. You’re taking a chance on a lot of running backs this year, whether it be rookies, sophomores, or old players coming back from injury/retirement/suspensions, so I am going to take players with a solid past before I jump all over somebody like Jay Ajayi (who I think will be terrible this year).

They really won’t have much to worry about this year since they’ll have 60 points a game put up for them, so hopefully that keeps them nice and relaxed. Defenses are more matchup based, but as one of the top scoring defenses, you pretty much know what you’re getting with them.
11. Martellus Bennett (GB – TE)

S.T.E.A.L. With Aaron Rodgers tossing the football to this mammoth of a human, it’ll be raining fantasy points every time they team up for a TD.

STEPHEN AUTOMATIC. He actually sucks now, but I needed a kicker, and the better ones were gone. I didn’t want to get stuck with Blair Walsh or something.

Who cares about the next three picks honestly, fill in your backup roles with some extra receivers and a backup QB who does NOT have the same bye week as your starter.
13. Andy Dalton (Cin – QB)
14. Corey Coleman (Cle – WR)
15. Corey Davis (Ten – WR)

This draft was a B+, and not as good as my other one, but that is the risk of drafting an overall balanced team. I wouldn’t say I have weaknesses, but I don’t feel like I have a strong team. Keep an eye out for waiver wire studs and injuries, that’s what will catapult you to the next level.