You know when you have a certain idea in your head that you want to tweet? And then you think about it and go, “This tweet will either get no likes, or, it will go viral and I’ll never be able to use Twitter again because I’ll be getting Retweet and Like notifications for years”. Well I had one of those a few nights ago, and, unfortunately, it went in the wrong direction.

I would have went into much greater detail, but 140 characters can only get you so far. So I’ll use this blog to explain it all.

In the Winter of 2016, Donald Trump’s political aspiration started to gain a lot more attention and was becoming much more serious. It was becoming more clear everyday that he was going to be the Republican nominee in the 2016 Presidential Race. Along the way, he made many bold, controversial remarks. He would say whatever was on his mind without having much care for the feedback he was given. Many of the comments he made were viewed very negatively, and people began to get offended and outraged by what he said, even though some statements were so outrageous that you almost had to enjoy them for entertainment value. Suddenly, it was politically correct to bash him on Facebook, bring up his past failures, and speak out in the media as to how bad he was for this country. Trump also made very negative headlines when a video came out from a private conversation in 2005 in which he said he grabbed women “by the pussy”. Many women all around the country began to be disgusted that this man was trying to become our President, and suddenly his treatment of women began to become a very hot topic.

LaVar Ball first made headlines while joining in on a broadcast of a UCLA basketball game, claiming that if his son Lonzo switched places with Stephen Curry (2-time reigning MVP), the Warriors would be better than they were at the time.

Most people thought “this guy can’t be serious, right?” but didn’t really think anything of it. But suddenly, the LaVar train was just leaving the station. LaVar continued to compare his son to other NBA stars. Next thing you knew, he was suddenly comparing his own skills to others, saying he could beat retired stars Michael Jordan and Charles Barkley in a game of 1-on-1. After UCLA’s season ended, LaVar and Lonzo (with LaVar being the real guest) were being invited on some of the biggest shows in sports.

With all of the crazy remarks LaVar made came a lot of feedback in the media. LaVar was bashed by many, most people thinking he’s a complete asshole and a fool. Just like Trump, there were very few public figures who had good things to say about him. Everyone felt the need to say how what he was doing was wrong and how he is only hurting Lonzo and his other sons, LaMelo and LiAngelo, who will also be playing at UCLA.

LaVar Ball has shown himself to be a misogynistic buffoon that is unworthy of our time and attention. I'm done. https://t.co/w8PUH3M0XH

Please dunk on him so hard that his daddy runs on the court to save him.. https://t.co/cMvt5RYiSQ

After LaVar’s claims of beating some of the greats in pickup games, people began to look up his athletic history to see if he had some credibility. It was discovered that in his only season of Division I basketball at Washington State, he averaged 2.2 PPG.

One of LaVar’s most negaitvely viewed moments came when he was on The Herd with Colin Cowherd, and he showed disrespect towards co-host Kristine Leahy, telling her “Stay in yo lane” and basically completely ignoring her existence on the show. This somewhat became LaVar’s “grab them by the pussy” incident. My favorite thing to come out of this was Big Baller Brand relasing a “Stay in Yo Lane” shirt for women, and tagging Kristine Leahy as one of the people in the tweet (click on the tweet to see what I’m talking about).

Now back to Donnie. Despite all the hype after sealing the Republican nominee in August, there was still much certainty around the country that Hillary Clinton was going to win the election. But then, the Don was here to stay, shocking everyone and winning the election to become our President for the next four years. All that “politically correct” bashing of him on Facebook and in the media is still extremely relevant today, as many people will bring up the things he’s done wrong and the outrageous things he has said instead of bringing up the good things he has actually done for this country. 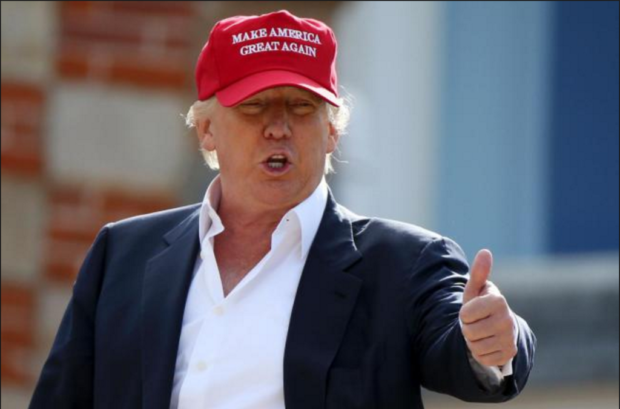 LaVar’s summer was big, and just like Trump, his big Fall is coming, with Lonzo set to make his debut for the Lakers in October. The senior Ball is only getting more publicity as we get closer to the season, and the negative press continues.

Whether Lonzo Ball struggles or succeeds during his rookie season, it will be very interesting how much attention LaVar gets in either of those scenarios.

As much as people bashed Trump, he still gave the whole world his middle finger by winning the election. As much as people have bashed LaVar, he still saw his son get drafted second overall by his hometown team, and has proved to be a marketing genius. It’s still yet to see what Lonzo will turn into, but its safe to say he will be one of the most paid attention to players in the NBA this year, and in the near future.

And at the end of the day, even though Trump’s role is extremely serious, you sometimes have to sit back and enjoy these two for entertainment value. Does Donald Trump do things that make many groups unhappy? Yeah, but you never know what’s coming and his presidency is a lot more interesting than those of George W. Bush and Barack Obama. Do many of the things LaVar says make no sense? Yeah, but getting mad at what he says is just a waste, and actually laughing at his outrageous remarks is a lot more fun.

After breaking it all down, I still stand by my genius tweet. Last summer, it was Donald Trump’s world. This summer, it’s LaVar Ball’s. Since many people are already calling for a changing of the guards in the White House, I think only one question still remains.