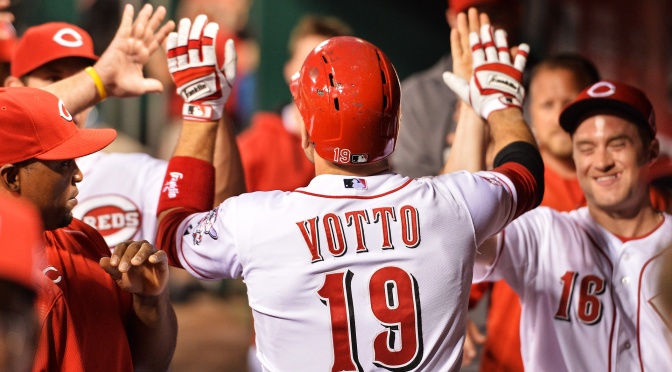 If you’ve never tried this before, I 12/10 recommend it.  All you need is about $350 dollars to purchase a PS4 and The Show.  Once that’s done, go to Season mode, choose a horrible, horrible team (ie: Cincinnati Reds) and quickly do everything you can to bring a title to their miserably failing city. To do this properly, you can’t put on force trades, and you can’t put on unlimited budget, that’s like juicing in the GM world.  It ruins the integrity and makes everything less fun (although baseball on steroids was un-fucking-real).

It basically comes down to making great trades, signing free agents, and flipping talent and prospects for WIN NOW-caliber players.

The Reds had a problem everywhere other than 1B (Joey Votto), 2B (Jose Peraza), CF (Billy Hamiltion), and C (Devin Mesoraco), so I had a lot of work to do:

After all that we finished 30 games under .500, but held much promise to our next season. We had a lot less holes to fill, and I planned on working on some free agent flipping to get some talent.

The free agent season didn’t work out as well as I wanted because no matter how much money I offered players, nobody wanted to play in Cincinnati. Alas, I plunged forward.

The “Adrian Beltre Move” is essentially a glitch in the game because I paid him $12.8 mil to be a DH on a National League team, but when the trade deadline came, people were willing to give up an arm and a leg for the 38 year old batting .210. Whatever.

So here was my starting lineup going into the second half of the 2018 season:

And here was my pitching staff

We won the NL Central by 3 games over the Cubs, and I beat the Astros in 7 games in a 6-1 victory to win the World Series, where Quintana threw 8 great innings and George Springer and Adam Duvall both homered.

I gave up pretty much my whole farm system and I had literally one good prospect left, but that’s the price of being a win-now team. My thanks go out to the Reds players who played well above expectation (Jeremy Hellickson went 18-2 with a 2.11 ERA and Blair Jimenez was Rookie of the Year in 2017, making it possible to trade Mesoraco for Quintana) and also Adrian Beltre. I have no idea why you are valued so incredibly high, but The Show seems to think you are worth the world, so I’ll take it. Congratulations to the fake Cincinnati Reds on the totally not real title, and congratulations to me for being such a great GM. Take notes.