As we approach the end of July, NBA free agency has wound down, NFL training camp is about to begin, and baseball is the only American sport in full swing. Therefore, it’s officially that time of year where every quote an athlete makes becomes news because there’s really not much else to talk about.

Training camps haven't opened yet, but the trash talk has already begun.https://t.co/4ONvSDWcPH pic.twitter.com/Dyx81aKWAU

Being that the Conor McGregor-Floyd Mayweather fight on August 26 is the next big sporting event that is approaching, everything these two do or say is considered news and all media outlets make sure they get a say on it (including Below the Belt Sports).

The most recent news is that Conor McGregor was seen wearing a CJ Watson jersey yesterday, and Watson allegedly slept with the mother of Mayweather’s children. This would be like Draymond Green showing up to play the Cavs wearing a Delonte West jersey. Most people would say this is the ultimate power move by McGregor. Most people think he’s going to lose, but any move he makes that could get in Mayweather’s head could be good and will also continue to give him publicity along the way. But a certain group of people will tell you that this was a terrible move by Conor, and one that has now surely wrapped up the victory for Floyd Mayweather. That group is fans of the NBA’s premier franchise, the Brooklyn Nets.

CJ Watson spent one year as a Net, the 2012-13 season which was the Nets first in Brooklyn and first playoff appearance since 2007. Overall, Watson had a solid season as the backup point guard to then All-Star Deron Williams, as he shot a career high 41% from 3. His 3-point shot was an absolute weapon in NBA 2K13. However, CJ’s tenure in a Nets uniform is remembered for one game and one game only.

Let’s paint the scene. The Nets were trailing their first round series to the Bulls 2-1 before Game 4 in Chicago. CJ Watson and Nate Robinson got into a skirmish in the 2nd quarter.

To this day I don’t know how Nate Robinson was not ejected. He was literally pinning Watson up against the scorers table. No fists were thrown, but you simply can’t do that, especially when you’re fighting off the ref trying to break it up. As it turned out, Robinson not getting ejected and Watson not getting injured during this skirmish turned out to be massive.

The Nets were cruising to a series tie late in the 4th, leading by 14 with just over 3 minutes to go. Me and my dad were getting ready to go to church for my cousin’s Communion the second the Nets wrapped this one up. The lead was about to grow to 16, but then CJ happened.

No big deal though. The Nets were still going to easily win, so this play was going to be just as forgotten as the fact that the Nets could have Draymond Green, Jaylen Brown, Damian Lillard, and Markelle Fultz had Billy King not been their GM (JK, no one forgets that). WRONG. Remember Nate Robinson, the guy that should have been ejected in the 2nd quarter? He went full Tracy McGrady 13 in 35 seconds, and the Nets lost in 3OT.

Oh, and we missed the Communion. My mom wasn’t too happy.

The Nets would go on to lose this series in 7 games. So what did we just learn? That Conor McGregor’s chances of winning this fight were already slim, but it’s now time to crown Floyd Mayweather the winner as Conor now finds himself under the CJ Watson Curse.

Also, how about Draymond Green being the absolute idiot that he is?

Draymond Green and Conor McGregor are going at it this morning on Instagram: pic.twitter.com/Ua3qIoh5gb

Since Draymond debuted for the Warriors in 2012, the Warriors have been wearing the same blue and gold jerseys that they currently wear. And they don’t wear this old jersey as an alternate or throwback. I could completely see fans or the media thinking this is a Green jersey, but Draymond just confirmed that he really knows nothing. 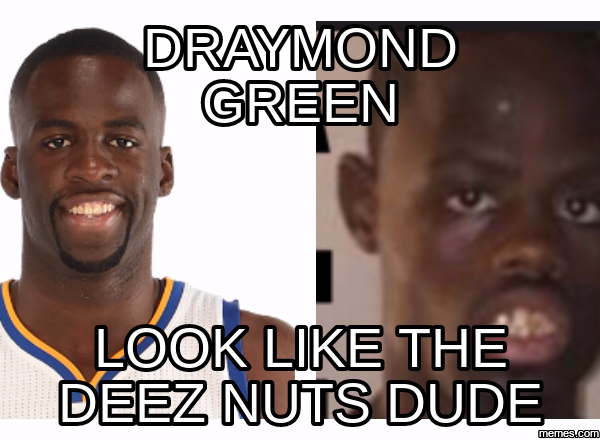