Before I start this, let me explain. Just because you do one or more of these things doesn’t mean I actually don’t trust you as a person. Most of these say nothing about your character. But these are just moves that kind of make me personally scratch my head. You might disagree and that’s okay, but if you have a real problem with it then chill out man I’m not even a real blogger, I’m just a college kid. So here goes. I do NOT trust you if…

-You knowingly leave the volume on an odd number

I think a lot of people can relate to this one. It’s a classic OCD move, but I just feel so much better about the TV or radio being on an even numbered volume. They say texting and driving is distracting, but it’s 10 times more distracting trying to get your radio on a certain volume (I like to keep mine on 42, shoutout Jackie Robinson.) Sure that’s kinda dangerous, but I’d rather take my chances than leave the volume on 41.

I’m not trying to go all alpha-male on you guys here and act like there aren’t valid reasons for guys who don’t drink beer. I’m not even saying beer has to be the drink of choice. If a guy would rather do rum and cokes or just rip shots all night than drink some beers, I can respect that. Some people drink tequila instead because beer is actually sorta kinda bad for you (I try not to think about it), and some people are even allergic to alcohol. But for guys who straight up don’t drink beer because they “don’t like the taste,” I do NOT trust you. That only works for girls (shoutout to all the girls who drink beer, you’re the real MVPs.) If your boys are cracking a cold one and your first instinct isn’t to join in, you definitely can’t be trusted.

-You call Gatorade by flavor instead of color 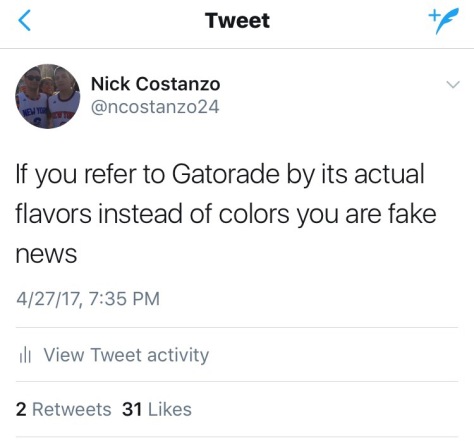 I don’t care if my kid gets a full ride to Harvard, cures cancer, and marries a Victoria’s Secret model. If I ask him what flavor Gatorade he wants and he says “lemon lime” instead of “yellow,” I’ve failed as a father.

-You prefer Starbucks over Dunkin

I’m a huge iced coffee guy. Dunkin is just waaaay better and cheaper. They actually make the drink for you instead of Starbucks making you add your own milk (big deal I know but you’d think for the price they’d do it themselves?) Also what the fuck is a venti size? Small medium or large, keep it simple, my tiny college blogger brain can’t process anything else beyond that. Plus Dunkin actually has edible food, too.

That’s it for Volume 1. Thanks for reading my irrelevant rant. Check back soon to see more people who I definitely don’t trust.