Writing a theory about Game of Thrones is a lot like filling out a March Madness Bracket — not only are there infinite possibilities, but you can spend hours working on it, refining it time and time again, only to finish and think, “This is perfect, absolutely everything is going to happen just as planned.”  Next thing you know, 3 of your 4 final four teams lose in the first round and your bracket is busted.

If you’re like me, you have been counting down the days until July 16th, the day that the the only show that combines politics, war, incest, and of course, titties and dragons, returns to TV.  If you need a refresher from where season six left off, here you go —

Just kidding I don’t give a flying fuck about Bran.

There are so many questions remaining and so few episodes left, and the show could literally go in any direction imaginable.  With that out of the way, here’s my answer to the million dollar question — how does it all end?

DISCLAIMER: Most of this I thought of myself, some of it is from different online articles/ videos that I thought raised very good points.

At the end of season six, Daenarys’ goal was to conquer the Seven Kingdoms, and Jon Snow’s goal was to lead the North to victory in their battle with the Army of the Dead.  In my mind, one cannot happen without help from the other.  The Targaryens will ban together, but not initially.  I think the season starts with disappointment; Daenarys and her ridiculously badass army of the Second Sons, a Dothraki horde, the Unsullied, three near-full-grown dragons, and the Greyjoys will face defeat in their first battle with Kings Landing (it pained me to type that bc fuck Cersei).  I don’t know how it happens, but I’m willing to bet it has something to do with wildfire (which will give the Dothraki Khal-Drogo-sized shits), and classic Cersei trickery.  The same outcome will occur to the North in their first showdown with the seemingly invincible dead.

After seeing Cersei’s madness come to complete fruition, despite his eternal love for his twin sister, Jaime teams up with his beloved brother and Dany, reuniting Bronn and Tyrion.

After these defeats, Bran decides to be useful and tells Jon that he is a Targaryen, giving him the idea to team up with Aunt Dany.  So thrilled that she is no longer the only Targaryen in the world, she jumps at the opportunity, but takes advice from my boy Tyrion to strike a deal- Daenarys, her dragons, and her army will help Jon defeat the Army of the Dead if he helps her claim the Iron Throne.  After a lot of boring scenes with Davos, Jon agrees.  With Jon striking from the the North, and Dany from the East, Kings Landing falls, and as the prophecy alludes to, Jaime sends his sword through Cersei’s back, reminiscent of him murdering the Mad King.

Together, with Dany on the Throne and Jon as King of the North, not to mention Yara gaining control of the Iron Islands, Westeros is united in the war against the dead.  It is at this time that he returns; Jorah Mormont, the most blue-balled player in Westeros, who has found a cure to greyscale and helps with the planning for the war.  Speaking of people coming out of nowhere, don’t think I forgot about about the fat one — no, not the butcher’s boy, but Samwell fucking Tarly.  After studying day and night (excluding time to bone Gilly) in the Citadel, Samwell discovers how to make Valyrian steel, giving the living a fighting chance.

When the Army of Westeros finally faces off against the Army of the Dead, none other than Petyr Baelish is riding on a white stallion next to the Knight King (steaming hot take).  You might remember Varys saying this of Baelish – 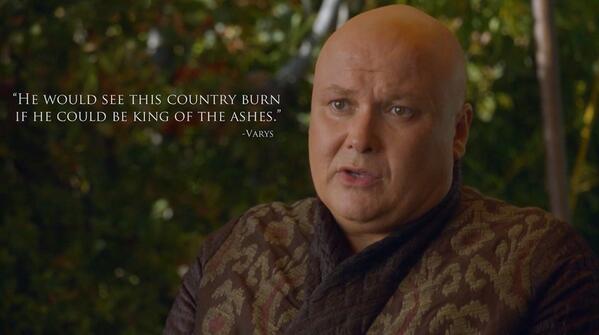 and I think he hit the nail on the head.  Unfriendly reminder- while I don’t think they will show him, Hodor will be fighting for the army of the dead (may he rest in peace).  In a showdown that puts the Battle of Blackwater Bay, Hardhome, and the Battle of the Bastards to shame, the living square off with the dead, with the dragons having a field day.  Who is riding the dragons you ask? Obviously Dany, throw on Jon Snow and his dragon blood, and finally, Tyrion (also a Targaryen?).  In a heartbreaking scene, Tyrion’s dragon is killed by the Night King, who climbs upon Khaleesi’s dead child, resurrects him, and flies into the sky with an ice-breathing dragon, fighting for the army of the dead.  Tyrion stays alive amid the mayhem, protected by his brother and Bronn.

In the most epic Game of Thrones scene ever, Jon and Dany fight the Night King, all upon dragon.  The three dragons fight above hundreds of thousands of soldiers, dead and alive, all fighting for their lives.  With tears flowing down her face, Dany is forced to (re) kill one of her children, taking down the ice dragon.  The Night King falls to the ground, and Jon dismounts to fight him.  After dismounting his dragon, the dragon breathes fire on Jon’s sword, lighting it ablaze, turning the sword into Lightbringer, making Jon the prince that was promised.  AZOR AHAI IS FINALLY REVEALED.  Jon defeats the Night King, and without his magic keeping the dead alive, the army falls, and the living are victorious.

At the end of the battle, after all of the time spent planning and preparing for battle, Jon and Dany look into each others’ eyes, realize they are victorious, and have the greatest, most anticipated TV hookup of all time.  Who cares that she is his aunt? They are Targaryens after all.

Arya, Ghost, Bronn, Grey Worm and Jaime rack up a combined kill-count of 500, and Podrick kills 50 with his metal sword, and 50 more with the sword between his legs.  At the end of the battle, Sansa and Brienne find Baelish, and after Sneaky Pete tries to pull some BS, Sansa finally tells Brienne to chop the asshole’s head off.

This theory needs a hell of a lot more Bran considering how much time the show has dedicated to him, and I am a big fan of aspects of this Bran the Builder theory.  Arya will marry Gendry, who Jon will legitimize, and they will rebuild house Baratheon.  I am probably crazy to think that not one Stark will die between now and the end of season eight, but a boy can dream.

The swords collected from the battle are used to create a second Iron Throne, forged by none other than Gendry Baratheon, and Jon and Danaerys sit side-by-side as King and Queen of Westeros.  Sansa serves as Warden of the North, with Tyrion returning as her husband.  The series ends with a know-it-all quote from Varys about how the Realm is finally at peace, and we all start googling when the spin-off series is coming out.