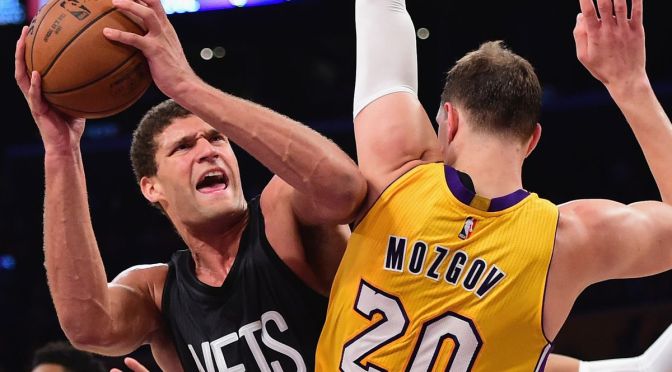 First off, besides that one project in high school that I pretended to work really hard on, this is my first blog post ever. I’m just going to come out and say I’m really not that funny, in fact I’ve thought I had so many funny stories in the past that turned out to be awful, that I have inspired an adjective to describe an awful story – the “Trevor Story”. It’s all in the delivery really, and apparently my delivery is about as good as Helen Keller trying to throw out the honorary first pitch, so let’s hope my blogging ability is better. Anyway enough of that…

Secondly, I want to say that this Lakers – Nets trade might actually be one of the worst things since sliced bread, and that’s really hard to do, because a lot of bad things have happened since some primitive Albert Einstein decided his bread would be more enjoyable in smaller servings.

Before I talk about the trade itself, I just want to say I honestly feel bad for every party involved, but especially for D’Angelo Russell and Timofey Mozgov, whose reaction when he found out he was traded can pretty accurately be summed up below.

I just can’t seem to understand how the Lakers or the Nets thought that this trade was a good idea. For Brooklyn, you get D’Angelo Russell as the cornerstone piece, a young kid whose better at scoring video of teammates talking about their body count on camera than he actually is at scoring the basketball.

Now maybe Russell does go on to become the potential superstar some have touted him to be, but frankly Russell didn’t impress me in college and 15.6 points per game isn’t gonna cut it, especially on a dreadful Brooklyn team. Secondly, the Nets get Timofey Mozgov in the deal, and while its great for the Lakers to get rid of the ridiculous contract they gave him, someone in the Brooklyn front office must’ve been smoking something when he agreed to this offer.

Don’t get me wrong, Mozgov is definitely a baller, I mean look at the guy. And he’s probably a great dude to go out and rip straight shots of vodka with until you can barely stand while he tells you stories about how he’s been doing this since he was 12, but unfortunately vodka shots are really the only shots he’s good at taking. The guy is a goof-ball on the court, and I don’t see how he can help this Brooklyn team other than helping them drink away the pain of another dreadful season with no first round pick.

I guess the Lakers are the winners in this deal, getting Lopez and the 27th pick, but there’s no center in the NBA I hate more than Brook Lopez. I mean the guy is 7 ft. tall, but he’s about as soft as a roll of Charmin ultra toilet paper, and for those of you who don’t know, that’s really soft. In fact, I was fortunate enough to attend only one Nets game during their recent stretch of awfulness, and even the Nets fans in front of me were chanting about how the guy’s got a gash as he took fadeaway shots over J.J. Barea. Plus, I don’t think any other center has been dunked on as many times as Lopez. I mean c’mon man.

Now maybe I’m wrong, and this trade works out for both teams. Maybe Russell becomes a stud in New York while he throws alley-oops to Timofey Mozgov soaring above the defense. And maybe Lopez has a great season in LA and is the next great Lakers center, catching dimes from Lonzo while LaVar ball tries to tell Magic Johnson his son will boycott playing unless the Lakers guarantee they’ll draft Liangelo and LaMelo. But that’s all a big maybe. I guess we’ll have to wait and see.