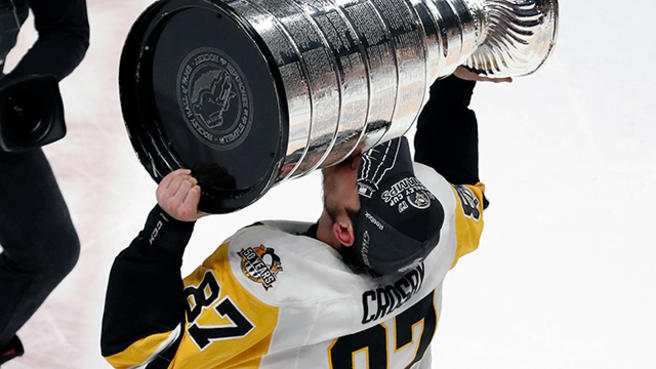 Last night, the Pittsburgh Penguins won their second straight Stanley Cup, and captain Sidney Crosby added a third championship to his Hall of Fame career (let’s see how long he remembers it for with all those concussions).

Tonight, Steph Curry and the Warriors could put away LeBron James and the Cavs, adding Steph’s second title and Kevin Durant’s first. This could happen in Game 5, in what has been a fairly lopsided series.

And this morning, ESPN opened Sportscenter with talking points on the NBA Finals game tonight, followed by the coverage of Game 6 of the Stanley Cup Finals.  And I wondered…why?

These two sports always seem to compete since their regular season and post-season run during the same time of the year, and you almost never see a playoff game occur on the same night simply to spread out viewership for networks. Yet when it comes to coverage, NBA is first. But what makes the NBA so much bigger than the NHL? Why is the champion of the NHL put second behind discussions of a possible champion in the NBA?

I know this isn’t really anything new, people always complain about hockey coverage on ESPN, and it has been a problem for a while. I am probably part of the problem as one of the people who turn off hockey when I see it on Sportscenter simply because I don’t follow it.  But is this what happens to everyone? Is hockey really that far behind the NBA that the night a champion is crowned, it is not even as important as analysts predicting an ending for the NBA? I have some theories as to why:

LeBron James, Kobe Bryant, Michael Jordan, Shaq, Steph Curry, etc. are all household names.  They have endorsements that you see EVERYWHERE.  They go beyond basketball, they are celebrities. In the NHL, the best players aren’t all over television. You’ll see a few commercials with Crosby or Ovechkin (ie: This Is Sportscenter), but never anything outside of sports-related products.  Therefore, only loyal hockey fans watch the games since people aren’t turning on the game to “see” anyone.

Basketball is global, hockey is not. Basketball courts are in every school, hoops in every front yard, and every kid plays rec basketball for at least a few years. Hockey is a sport that requires a specific skill set to even play, let alone be good at. So, it is not as popular or common of a sport to play, which separates fans immediately since they simply don’t relate as much.

I personally don’t agree with this argument, but I’ve heard it from enough people I should include it.  People who turn on hockey say they can’t follow the game because it’s too fast, they can’t see the puck, and they don’t know who’s who on the ice.  This is pretty much just being a lazy fan and not wanting to follow the game because you don’t know what’s going on, so while not really valid or reasonable, it still has to be considered.

HOCKEY FANS CAN GET ANNOYING

Every time anything cool happens in hockey, hockey fans throw it in your face, like this:

These are just my thoughts, and I’m sure there are more issues involved, but when the NHL Playoffs had an 8 seed and a 1 seed in the finals going evenly head-to-head, and the NBA has had the same team three years in a row, I think it’s time for a “changing of the guards” and for the people covering sports to wake up.