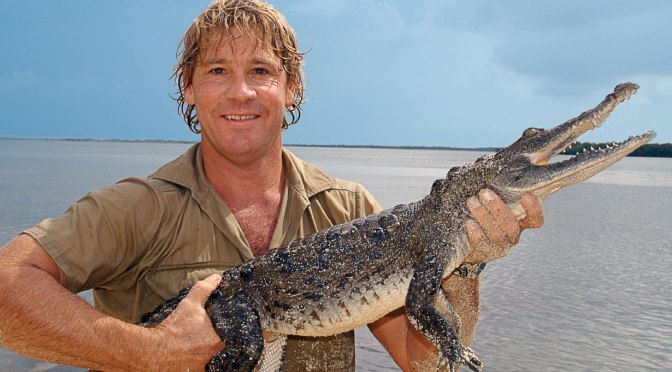 Steve Irwin was one of the few Australians that were actually cool, and when he died in 2006 it was a global tragedy.  People forget sometimes just what an absolute powerhouse this guy was on The Animal Planet.  The Crocodile Hunter is probably one of the greatest animal shows ever because Steve Irwin literally threw his body at “mighty crocs” and “beautiful creatures” like he was diving onto a Sleepy’s mattress (that’s a shot at possible advertisements).

I’m writing this just to send a reminder to people who may not know or remember what a legend this guy was. So here are some outrageous videos of him just being one with nature.

He says “Shalom” to the deadliest snake on Earth

I’m not sure how many “deadliest snakes on the planet” there are,  but this is another one that Steve Irwin tames.  He took this on like a WWE Steel Cage match.  Riveting entertainment.

No problems here, just dangling a pound of meat in front of a hungry crocodile while holding his baby son.  Married to the game.

A bit of irony on this one.

He literally got bit by a snake and acted like he poked by a Q-tip.

He was playing free safety for a little the Australian Wild and fucking caught an emu on foot.

Hopefully, these videos took you on a YouTube loop of some of the greatest things Irwin did. Steve Irwin was out of his mind, and every now and then it’s good to remind people of it.