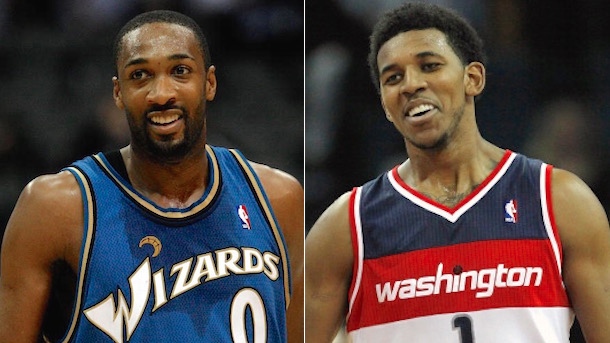 As a big LeBron fan who also can’t stand Kevin Durant, the first two games of the Finals haven’t exactly been what I was hoping for. So I’m not gonna write about them. Because I don’t know about you guys but if I see one more “Is KD better than LeBron now?”, “Are the Warriors the best team of all time?”, or “Will LeBron leave Cleveland again?” article, I’m gonna lose it like Lamar Odom post-Khloe (Tristan Thompson’s play through the first two games has kept the Kardashian curse alive, by the way.) So let’s throw it back to two of the more lovable NBA players of the past decade, Nick “Swaggy P” Young and Gilbert “Agent Zero” Arenas.

Basically, if you haven’t seen this video, Gilbert shows up to Swaggy P’s house shortly after his breakup with Iggy Azalea and makes himself at home. I don’t wanna spoil anything, so watch and enjoy.

First of all, NoChillGil may be the most fitting Snapchat username of all time. Guy is a straight savage. There are a few snaps in the video that are genuine laugh out loud worthy, but the last one does it for me. “Making room for your IG bitches” is just about as classic of a line as you can get. So as far as the best NBA duos go, LeBron and Kyrie or Steph and KD don’t even come close to Gilbert Arenas and Swaggy P. Or Swaggy P and his IG bitches.