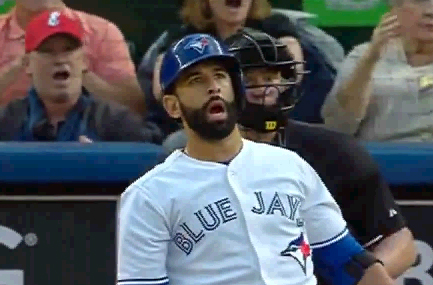 Good morning friends, family, faculty and esteemed guests. I’d like to discuss with you all the douchebag above. Tonight, our good friend from up north shook Atlanta, and for all we know, the entire state of Georgia when he gave the most irrelevant/cocky bat flip home run celebration May baseball has ever seen. It cut Toronto’s deficit in the game from 8-3 to a whopping 8-4. I genuinely do not understand it. Joey Bats literally craves pissing off opposing teams via bat flip. Like literally sits up at night brainstorming ideas of how to run around the bases in the most douchey fashion so that all 13 of the Braves fans at SunTrust Park can have their blood boiling.

Look at this guy with the long hair to the left. I can literally hear him screaming “Chipper Jones didn’t die for this!!” through my computer screen. The sad part is, I’d be cool with it if it was anyone else doing this homer celebration. Literally, anyone else. Throw DJ Tanner from Full House in the batters box and have her pimp the shit out of home runs- she instantly becomes the biggest savage in the league. Sign me up, I’d be going ham in the stands with Uncle Joey, Danny, Jesse and the gang. Hell, even bring Uncle Joey’s puppets, just fuel to the fire baby. You get my point. Bautista can not be the poster child of bat flips. He’s so not likable. Lets go down the check list: He plays in Canada, he’s batting .208 while getting paid $18 million, he 111% juiced for years and got away with it,…he plays in Canada. I don’t know why I feel so strongly against him, I just do. I’d bet a good amount of money that he still wears his old varsity jacket at age 35. He’s just that type of guy.

To sum up this PSA, and I think I speak on behalf of every man, woman, and child who cares about the well being of baseball, when I say we’re tired of it Bautista, give it a rest. Bat flips are one of the last things left in the MLB that outsiders of baseball can say “wow, this guy’s balls must go past his knees”. Don’t be a dick and ruin this for us Bautista. Cough it up champ, its over. After Rougned Odor turns your face into a Mythbusters slo-mo cam clip, you can’t be the bat flip guy anymore. You knew that going into this. I didn’t write the rules, I just abide by them.

You either die a hero or live long enough to get the sauce from the knuckles of a second baseman. End rant.